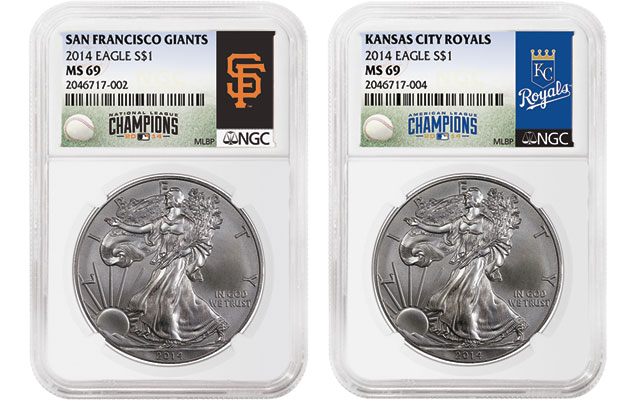 Numismatic Guaranty Corp. has reached an agreement with Major League Baseball to use special grading label inserts for coin grading and encapsulation. The first of these labels showcase the teams in the World Series, the San Francisco Giants and the Kansas City Royals. 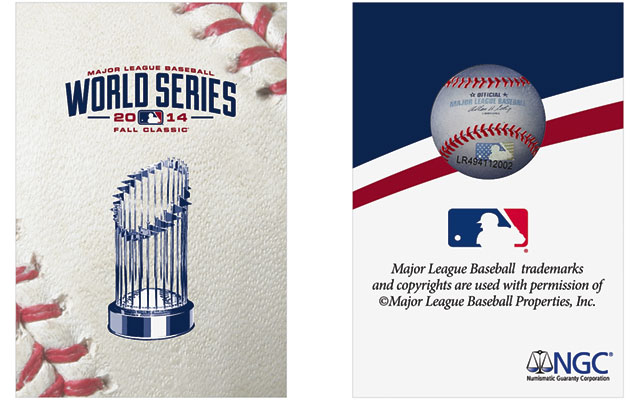 All coins graded and encapsulated with the MLB label insert will be accompanied by a special card with the MLB hologram and showing the Commissioner’s Trophy, which is bestowed to the winner of the World Series.

Major League Baseball has the Rawlings Gold Glove Award and Silver Slugger Award, and now collectors can have silver and other coins in holders with baseball-themed labels.

Numismatic Guaranty Corp. confirmed Oct. 22 that it had finalized a deal with Major League Baseball to offer labels with a range of popular MLB trademarks, including the MLB silhouetted batter logo, the logos of the 30 clubs, stadium imagery, MLB All-Star Game logos and more.

The first two of these MLB labels showcase the logos of the teams facing off in the World Series contest that began Oct. 21, the Kansas City Royals and the San Francisco Giants. One logo shows the American League Champion Royals, and the other the National League Champion Giants.

A World Series champion logo will also be available shortly.

Labels for all 30 teams are in development, according to Mike Browne, vice president of the Certified Collectibles Group, parent company of NGC.

“Right now, we’re planning for a big release of those team labels and other special MLB label concepts to coincide with Opening Day 2015. It’s possible that we could release certain popular team labels sooner, but we haven’t made that call yet,” said Browne via email.

A shared appeal exists between baseball fans and coin collectors, according to NGC, based on the demand for the 2014 National Baseball Hall of Fame coins issued by the U.S. Mint.

NGC will encapsulate the National Baseball Hall of Fame commemoratives and other legal tender coins with the MLB certification labels. A special label program will coincide with MLB Opening Day, April 6, 2015.

All coins graded and encapsulated with the MLB label insert will be accompanied by a special World Series Fall Classic card with the MLB hologram and depicting the Commissioner’s Trophy that is bestowed to the winner of the World Series.

As of now, two exclusive license partners have reached agreements with NGC to use the labels, GovMint.com and Silvertowne. Both firms will be offering NGC-certified 2014 National Baseball Hall of Fame half dollars and 2014 American Eagle silver dollars with the special labels.

No details about pricing or quantity of coins with the special labels was available from representatives of either firm as of Oct. 22.

Responding to whether NGC might work with other partners, Browne said: “It’s just them right now, as they’ve really stepped up with support for the program. We haven’t made any decisions or plans to open it up later.”

The program is not limited to U.S. coins, and could include past baseball commemoratives and certain world coins.

“We can use any legal tender coins, ...” Brown said. “There could be some fun things for us to explore.”