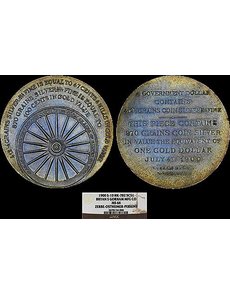 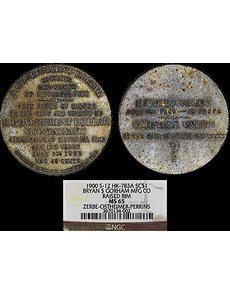 Struck by Gorham Manufacturing Co., Silversmiths, this Bryan Dollar (S-12 or HK-783A) questions the coinage value of the silver the medal contains.

Bryan Dollars are satirical medals struck by opponents of William Jennings Bryan, who ran unsuccessfully for president against William McKinley in 1896 and 1900.

The medals are among the approximately 16 different varieties cataloged by Fred Schornstein in Bryan Money and in So-Called Dollars by Harold E. Hibler and Charles V. Kappen. The NGC grading inserts encapsulated with each of the 14 Bryan Dollars in the auction bear the attribution numbers assigned in both references.

The 14 medals that have been certified were once in the collection of Zerbe, a major numismatic promoter in the early 20th century who was involved with the sale of the 1903 Louisiana Purchase Exposition commemorative gold dollars, the 1915 Panama-Pacific International Exposition commemorative coins and medals, and the creation of the Peace dollar.

After Zerbe, the 14 Bryan Dollars became part of the collection of Mr. and Mrs. Alfred J. Ostheimer. Although the Ostheimers are best known in numismatic circles for their impressive silver dollar collection, they also had a significant collection of so-called dollars, the series of commemorative medals that includes Bryan Dollars.

The Ostheimer So-Called Dollar Collection consisted of slightly more than 1,000 pieces, including the 14 examples recently certified by NGC.

Collector W. David Perkins acquired the collection intact over a decade ago from Mrs. Ostheimer.

All of the 14 Bryan Dollars Perkins recently submitted to NGC have achieved grades making them either the single finest graded or tied for that distinction, according to the grading service.

The medals are linked to an economic collapse in the United States in 1893 that hit farmers particularly hard. They became ardent advocates for an increase in the money supply through the free coinage of silver. At the time, the United States adhered to the gold standard, which meant that gold had to be held in reserve for paper money to be printed.

The value of silver, however, continued to decline with increased mining in the West, and as a result the silver content of coins was worth far less than their denomination.

Farmers aligned with Western miners to propose that the U.S. Mint buy unlimited quantities of silver from the public to strike into coins. This would give the miners an outlet for their silver, and the inflation that would result from a significant increase in the money supply would allow the farmers to repay their debts for a fraction of their former value.

The Democratic, Silver and Populist parties rallied behind Bryan, but he lost to McKinley in the 1896 and 1900 elections.

Bryan’s opponents produced medals with designs and legends critical of his free silver policy — the Bryan Dollars. The medals were often of a satirical nature.

For more information, visit the NGC website at www.ngccoin.com. ¦