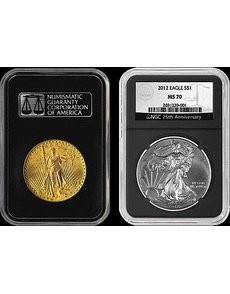 Shown left is a 1924 Saint-Gaudens gold $20 double eagle in an NGC encapsulation from 1987; at right, a 2012-S American Eagle silver dollar in NGC’s new “Retro Holder” — a 25th anniversary homage to the company’s original “Black Slab.”

In celebration of its 25th anniversary, third-party grading service Numismatic Guaranty Corp. will offer what it calls a "Limited Edition Retro Holder" for several series of coins, for three months, from Oct. 1 to Dec. 31.
The holder is similar to the first encapsulation NGC used in 1987, often called “Black Slabs” by collectors.
“This holder is reminiscent of our original holder used in 1987, featuring a sleek black core,” said NGC chairman Mark Salzberg. “We couldn’t be more excited to make the NGC Retro Holder available to collectors and dealers.”
Steve Eichenbaum, chief executive officer of NGC’s parent company, the Certified Collectibles Group, added: “Since its founding in 1987, NGC has invested millions of dollars and thousands of hours of research and development into insuring that our holders are the finest in the world to protect and showcase your collection. NGC’s state-of-the-art label and hologram have evolved over the 25 years we’ve been in business and are a few examples of how NGC is committed to protecting the consumer and the hobby.”
On the Collectors Society Internet forum at http://boards.collectors-society.com, initial reaction to the new offering was mixed. Some users posted thoughts in favor of the “retro” slabs, while others were against the idea. Some posters expressed hope that NGC would extend the concept to other submitted coins, not just the American Eagle silver coin, Sacagawea/Native American dollar and Presidential dollar.
Allure of the ‘Black Slab’
The original “Black Slab” holders, featuring a protective black-colored core within a sealed plastic enclosure, were used by NGC after the company was first formed in 1987. The encapsulations date from the company’s first several months of operation, from September through November 1987.
Coin World’s Dec. 13, 2010, “Market Analysis” stated, “Few of these holders remain today. Estimates on the number of surviving black holders range from 35 to 200, and they are collected as novel relics of the early days of third-party coin grading.”
As such, coins graded by NGC and still remaining in their 1987-era “Black Slab” encapsulations are alluring to collectors interested in the history of third-party grading, and coins in these holders typically carry a substantial premium value when offered for sale, when compared to similar coins in more recent slabs.
The original “Black Slabs” have the coin’s identifying information (date, denomination, grade and identification number) paired with the reverse side of the coin, with the company logo and name inserted on the side with the coin’s obverse.
The labels on the new “retro” encapsulations follow NGC’s modern method of having the coin’s identification on the obverse side of the slab and the company’s holographic logo and name on the reverse.
Also different from the original slab, the obverse label of the retro encapsulation carries an identification bar code and the legend “NGC 25th Anniversary.”
As well, unlike the older style slabs, the retro slab will feature NGC’s trademarked EdgeView holder, a core introduced in September 2008, which suspends the coin upon four cushioned prongs, allowing collectors to view most of the coin’s edge. As opposed to the white of the core for modern slabs, however, the core within the retro slab will be colored black.
Getting the ‘Retro’ slab
According to NGC, Collectors Society members submitting coins must follow certain procedures to have their coins encapsulated with the special holders.
Submissions must be received by NGC between Oct. 1 and Dec. 31. The program ends on or before Dec. 31 based on availability as quantities of the holders are limited.
According to NGC: “Coins for the Retro Holder and special label MUST be on their own submission invoice. The coins cannot be mixed with other coins to qualify for this holder” and collectors should write “Retro Holder” on the submission form.
For those sending American Eagle silver coins, NGC says to select the “Silver Eagles” tier. For the Sacagawea/Native American and Presidential dollar coins, NGC says to select the “Modern Special” tier or higher.
There is no additional cost for the service.
Coins previously encapsulated by NGC are not eligible. As well, NGC representatives will not accept submissions for this special holder at trade shows.
For bulk submissions, dealers should first contact Scott Heller by email at sheller@NGCcoin.com or by telephone at 800-642-2646.