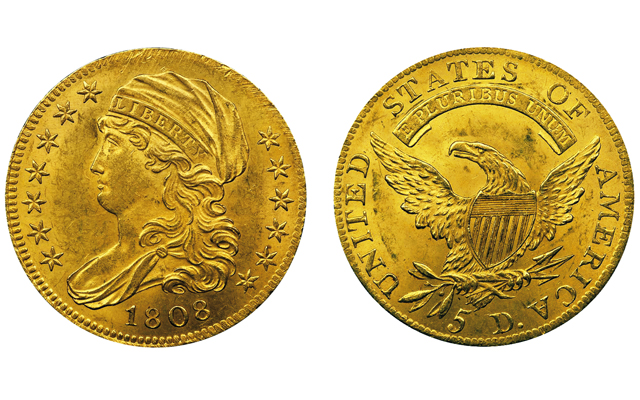 This 1808 gold Capped Bust $5 half eagle is among the coins the can now receive Bass-Dannreuther numbers from NGC.

The following is a release from Numismatic Guaranty Corp.:

Numismatic Guaranty Corp. has added early federal gold coins to the series that it will recognize comprehensively by variety numbers. All quarter eagles, half eagles and eagles struck prior to the August 1, 1834, weight reduction may now be submitted to NGC under its VarietyPlus Service to receive Bass-Dannreuther numbers.

These early U.S. gold coins were a specialty of the late Harry W. Bass Jr., and his variety studies in this field were published as a sylloge by his research foundation in 2001. Numismatist John W. Dannreuther then added the few varieties that Bass lacked to create a complete catalog of all die marriages, titled Early U.S. Gold Coin Varieties. It is from this reference that early gold coins are now attributed by BD varieties.

Submitters who wish to have their 1795-1834 U.S. gold coins attributed by BD numbers may do so by selecting NGC’s VarietyPlus option on the submission form. A fee of $15 is charged for this service above the selected grading tier. For those dates having only a single die marriage, the BD variety is applied automatically at no additional fee. A complete listing of BD varieties, detailing those that require a fee and those that do not, may be found here on the VarietyPlus webpage.