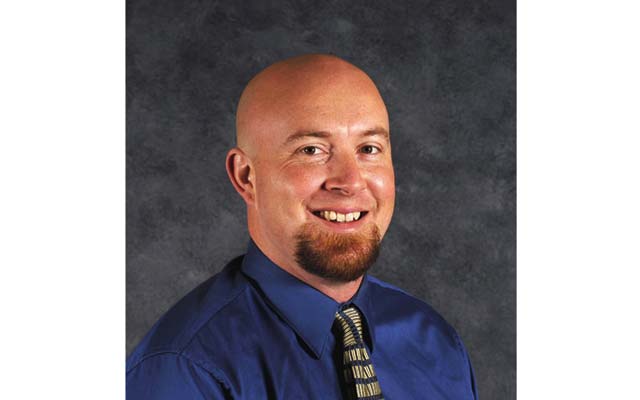 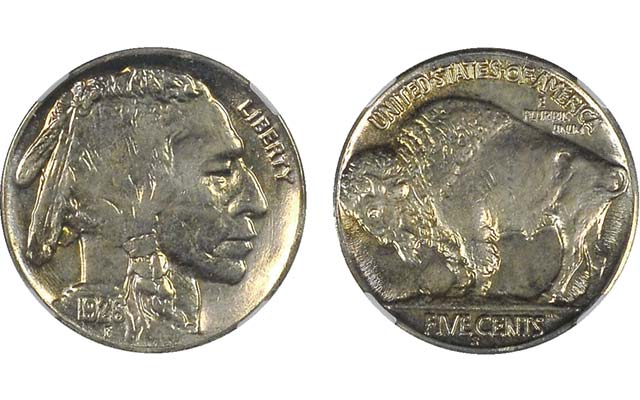 A 1926-S Indian Head 5-cent coin was not a genuine coin at all, being the halves of two coins paired together. The 1926 “Buffalo nickel” obverse was joined with the reverse of a 1931-S coin. 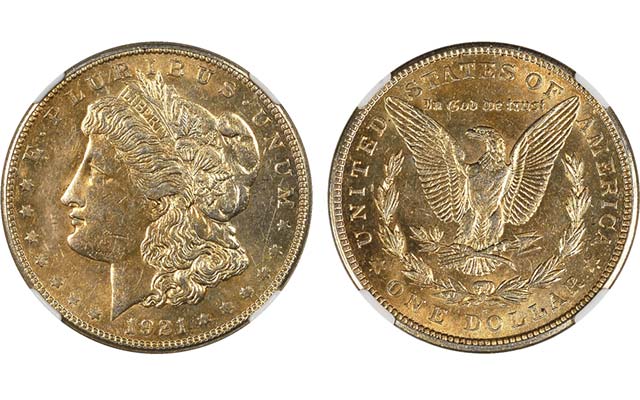 One of the 64 coins graded by class participants is this 1921-S Morgan silver dollar. The actual grade is Mint State 61. 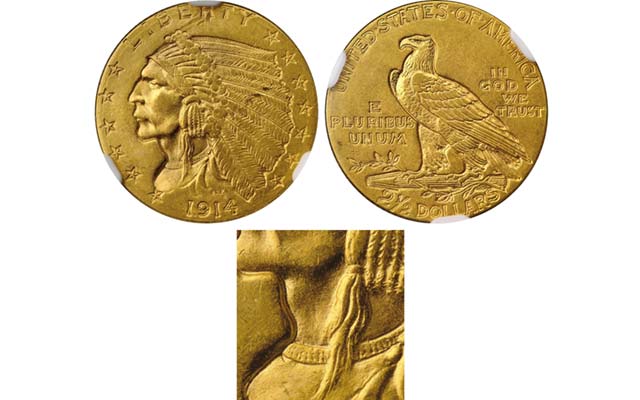 Minor tooling marks on the neck of the Native American indicate that this 1914 gold $2.50 quarter eagle is counterfeit.

In old police procedurals, any time the scene cuts to a dark room with one bright light, you can bet someone is about to be interrogated.

I’ve never been interrogated, but a recent experience in Numismatic Guaranty Corp.’s one-day grading class is close enough, in my book, to count.

The class was held in a dark room, broken only by bright lights.

Was I nervous? Check.

On March 28, while at the Whitman Expo in Baltimore, I was able to take NGC’s introduction to grading course with NGC grader John Schuch II.

Though I am fortunate to blend my hobby with my profession, my background with numismatics has focused on the historical side.

When I found out I would be attending the Baltimore show, I knew the grading course would help me learn and grow in the hobby.

And am I ever glad that I went!

Schuch shared just some of the knowledge gleaned from his two-plus decades in the hobby, half of which he has spent at NGC. He received his start in coins working for his coin dealer father, before serving in the U.S. military.

At NGC, two people grade each coin, with a third person, the finalizer, ready to arbitrate any dispute. Schuch grades from 350 to 600 coins a day, he said, even including time to discuss coins with other graders for a different perspective.

Sixteen students formed the class in Baltimore. Over the course of the day, we participated in four rounds of grading, reviewing 16 coins per round, punctuated by discussions about why we arrived at our grades.

Each student was given 60 seconds to make notations and grade each coin, before handing the coin to the next student. If Schuch took a minute per coin, he said, he’d have been fired long ago.

The clock started and I panicked. It takes me 15 minutes to decide what I want at a restaurant — how was I going to grade a coin in less time than a commercial break?

After we graded each coin, Schuch shared what the grades of the coins had been as NGC had encapsulated them. At times he expressed disagreement with NGC’s assigned grade, preferring another (often more conservative) grade.

I considered it a victory if I matched either the holdered grade or the grade assigned by Schuch.

The first round was pitiful. After nailing the first coin, I struck out on each of the others.

The second round was only slightly better, before a tricky third round had many of us (myself included) fooled.

By the final round, I was able to correctly grade six of the 16 coins. That round featured a counterfeit 1914 Indian Head gold $2.50 quarter eagle, which had telltale tooling marks visible only upon microscopic inspection.

Besides confidence in my ability to improve as a grader, I walked away from the class with three major (if commonly known) lessons about grading.

The first lesson is that lighting is critical.

Sunlight and fluorescent lights are no-nos, Schuch said. Graders at NGC work in rooms with no outside lights. One bright lamp is focused on a narrow field at each grader’s desk.

How important is even lighting?

NGC has a stockpile of incandescent light bulbs (which by law are no longer made) to ensure graders have proper light for years to come, he said.

Schuch said he can visualize the design of certain coins in his head, so when he is grading coins, he already has a mental image to compare to the coin in hand.

In this way, it seems that grading coins is like looking for typographical errors.

As a writer, I have spent hours reading every week. Typos often “pop out” at me immediately when looking at a page.

In the same way, hobbyists employ pattern recognition when looking at coins. Knowing what should be there matters tremendously in determining what’s right (and wrong) about the coin you’re holding.

The final lesson is that you’re going to make mistakes.

The cliche rings true — mistakes are the price you pay for education.

Three coins in the third round of grading, which was by far the toughest, illustrated the challenges that grading services, dealers and collectors face.

A “1926-S” Indian Head 5-cent coin was actually the obverse half of a cut-down 1926 example mated with the reverse of a 1931-S 5-cent coin. The edges of the coin were smoothed to conceal the mark created by the joining of two halves.

“Two of the biggest graders [in the country] missed it,” Schuch said.

Two other coins in that round, a 1914-D Lincoln cent and an 1891-S Morgan silver dollar, each featured an added Mint mark.

Even the professionals make mistakes, but thankfully, NGC stands behind its service, and when there is a rare mistake, collectors are protected with a buy-back promise.

I have work to do, and many coins to study. But I look forward to spending many decades in the hobby, increasing my knowledge and sharing it with others.

Want to know more about coin grading? Here are some stories!

Who do I turn to for grading: Collector ponders grading options