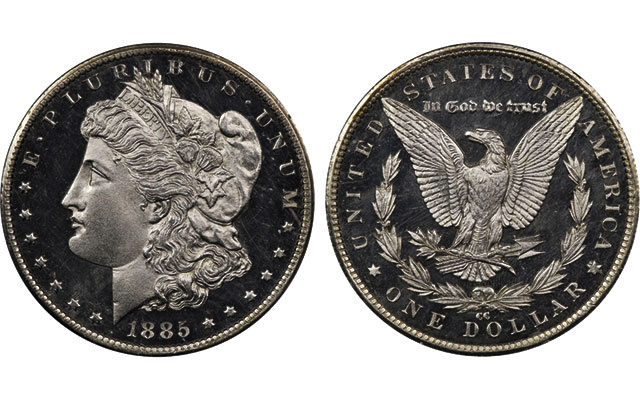 NGC has graded and encapsulated what its experts and consultants consider to be the first identified Proof example of an 1885-CC Morgan dollar.

Numismatic Guaranty Corp. has graded and encapsulated what it believes to be the first example identified of a Proof 1885-CC Morgan dollar struck at the Carson City Mint in Nevada.

The coin is owned by an anonymous client of The Numismatic Financial Corp. Inc. in Winter Springs, Fla.

NFC’s Matthew Kleinsteuber said the anonymous collector plans to offer the coin at public auction sometime during the second half of 2015.

“I purchased the coin about 15 years ago at a small local show and [k]new it was completely DIFFERENT than any 1885-CC I have ever seen in over 40 YEARS of collecting silver dollars. My first impressions of the coin were it looked just like an 1885-P PROOF MORGAN DOLLAR so I kept it all these years and decided to sell it to put both my children thru college.”

In a Feb. 19 email, NGC Vice President Scott Schechter said: “Nothing suggests to us or to our consultants who viewed this coin that it is anything other than a Branch Mint Proof. It is fully struck from new dies with deliberately prepared granular frost.

“A die study revealed, as expected, that these same dies did also produce proof-like business strikes in later state. This proof coin contrasts from them measurably in its depth of mirror, squareness of flan, fullness of frost and crispness of its devices. As a proof, this coin was specially handled upon ejection from the dies and has no bag marks. This feature is strongly associated with Branch Mint Proofs, while currency issue Morgan Dollars universally display this form of contact marks almost without exception.”

Schechter said the Proof 1885-CC Morgan dollar has rims like those of a fully struck dollar, but they are not of “knife” sharpness.

“In this respect it is similar to other Carson City Branch Mint Proof dollars, and differs from Philadelphia Mint Proofs dollars which are more square,” Schechter said about the shape of the rims.

Schechter said NGC graders and consultants who evaluated the coin were not bothered by the coin’s lack of toning.

“I do not know much about the coin’s 130-year storage and preservation history,” Schechter said. “We see tens of thousands of untoned Carson City Morgan dollars housed in GSA holders, and every week we see untoned proof Morgan dollars in the grading room. This feature of the coin’s appearance was not unusual or bothersome.

“The coin does have some light hairlines that factored in to the grade assigned.”

A supposed Proof 1885-CC Morgan dollar was offered at auction 100 years ago, according to Kleinsteuber, but there is no way of knowing whether the coin owned by NFC’s client is the same coin.

In United States Coin Co.’s May 19 to 21, 1915, sale Catalogue of the Superb Collection of United States Coins Belonging to a Prominent American, USCC president and auction cataloger Wayte Raymond describes the 1885-CC Morgan dollar in Lot 1154 as such: “Brilliant proof. This date is very rare in any condition and probably unique as a proof.”

The coin sold in the 1915 auction for $10, according to the prices realized. The auction also included what were described as Proof 1883-CC and 1893-CC Morgan dollars, which sold for $4 and $2, respectively.

Branch Mint Proof coins of any denomination are unusual and often rare; most Proof coins in the 19th century were struck at the Philadelphia Mint, the oldest of the U.S. Mints.

Branch Mint Proof Morgan dollar examples are known from the Carson City, San Francisco and New Orleans Mints that were struck under special conditions or in recognition of a specific event:

Goe examined NGC’s images of the Proof 1885-CC Morgan dollar and determined the piece to be a VAM-3 die variety as attributed in Comprehensive Catalogue and Encyclopedia of U.S. Morgan and Peace Silver Dollars by Leroy Van Allen and A. George Mallis.

Goe is an expert in the coinage of the Carson City Mint and is the author of The Mint on Carson Street and James Crawford: Master of the Mint At Carson City, A Short Full Life. In The Mint on Carson Street, Goe notes that despite Treasury records being devoid of records on “official Proof or Specimen Strike coins listed ... for Carson City, numismatists have long acknowledged the existence of such pieces.” He examined the images of the coin that NGC sent to Coin World, but said that he would need to examine the coin in person to conclude whether, in his opinion, the coin is a Proof or an Ultra Deep-Mirror Prooflike coin.

The Carson City Mint struck a reported 228,000 Morgan silver dollars in 1885, before all coinage production there was suspended March 28, 1885, and not resumed for four years.

Mint State examples, however, are less rare; 1,000-coin bags of Uncirculated 1885-CC Morgan dollars were released from Treasury Department vaults beginning in the 1930s and trickled out thereafter.

Additional quantities, according to Bowers and Borckardt, were released from Treasury vaults between 1962 and 1964, at the end of which a reported 148,285 of the 1885-CC coins were reserved for later sale by the General Services Administration.

This latter hoard was released during the 1972 to 1974 GSA mail-bid sales.

All but 31,569 of the 1885-CC Morgan dollars in Treasury vaults were sold in this three-year period, and those went into the Treasury’s final public sale of the coins via the GSA in 1980. Bowers and Borckardt estimate that approximately 175,000 of the coins struck are currently held by the public, with the others lost or possibly melted under provisions of the Pittman Act of 1918.

The act authorized melting up to 350 million dollar coins into bullion, and its sale or use for subsidiary silver coinage. The act also mandated the acquisition of domestic silver for recoinage of a like number of silver dollars.