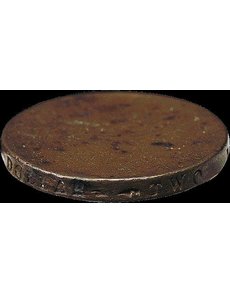 An unstruck planchet with the edge device of a 1793 Liberty Cap half cent and with raised rims has been authenticated and encapsulated by Numismatic Guaranty Corp. 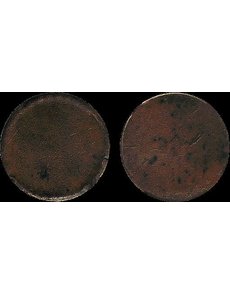 The flat surfaces of the planchet intended to be struck with the obverse and reverse dies are rough, as typically seen on planchets before striking.

An unstruck, lettered edge planchet has been authenticated and certified by Numismatic Guaranty Corp. as having been intended for a 1793 Liberty Cap half cent.

The planchet was encapsulated by NGC as a Mint error. The planchet measures 21.2 millimeters in diameter and weighs 6.75 grams.

The incuse edge lettering on the unstruck planchet reads TWO HUNDRED FOR A DOLLAR followed by two leaves pointing at one another.

The anonymous California dealer who submitted the planchet to NGC told Coin World Feb. 21 he planned to consign the piece to the Stack’s Bowers Galleries May 9 to 11 auction to be held in conjunction with the American Numismatic Association National Money Show in New Orleans.

The dealer did not disclose how the unstruck planchet came into his possession. The dealer said he knew he had something special and what he had was likely an unstruck 1793 Liberty Cap planchet with edge lettering after consulting two half cent references.

According to David W. Lange, NGC’s research director, the edge device on the unstruck planchet is known as the Edge of 1793 and is unique to that issue, thus permitting researchers to identify the intended date and design. Edge ornamentations on subsequent-dated issues feature a single leaf.

Although the planchet was never struck with obverse and reverse dies, the planchet displays a perfectly lettered edge, Lange said.

“This is entirely possible, as the edge lettering was applied first in a separate step before the obverse and reverse dies completed the process of coining,” according to Lange.

The weight and diameter of the planchet are within tolerances, Lange said.

“Half cents dating from the first emission in 1793 through the end of calendar year 1795 were struck to the original standard of 104 grains, which translates into 6.739 grams,” according to Lange.

Some collectors have raised the question in online forums whether the planchet could be a reproduction produced by the former Gallery Mint, a private mint in Eureka Springs, Ark., and expertly weathered to look like a genuine original planchet from the 18th century. Some of the company’s early American coin replicas have been altered by those seeking to pass them off as genuine.

Lange debunked those concerns, noting: “It’s too accurate to be a GM replica. The style of lettering is precise.”

Ron Landis, the master engraver and co-founder of the Gallery Mint, concurred. “I think Dave is probably right,” Landis said. “I don’t think I tried to make mine THAT close. I didn’t have a real one to use as a model, so the GM version should be noticeably different to anyone who is familiar with them.

“If I remember right, I think I hand cut the letters in my master edge dies which isn’t as crisp as if it were done with punches like this one was apparently done,” Landis said.

Lange notes the existence of documented accounts of planchets and other coining remnants retrieved from the site of the first U.S. Mint when the structure was razed in 1911.

“These were described by Frank H. Stewart, owner of the structure, who had it removed for the construction of his new building, which itself was razed in 1965,” according to Lange. “Stewart published a history of the original structure and its operations in 1924, in which he illustrated several planchets and struck coins found during his excavation.”

Half cent specialist Bob Grellman said his examination of images of the lettered edge on the planchet indicates it is a “stage II with upset rims” piece.

A blank planchet with lettered edge was reported in January 1869 by numismatist Ebenezer Locke Mason in Mason’s Coin and Stamp Collector’s Magazine in an article titled “Peculiarities of American Coins.”

Mason reported he identified the piece in his own collection as being an unstruck 1793 Liberty Cap half cent planchet with lettered edge.

Researcher Walter Breen reported in his half cent reference, published in 1983, that the whereabouts of the Mason piece were unknown at the time of the book’s publication.

Half cent specialist Mike Spurlock said the lettering diagnostics for the unstruck 1793 Liberty cap half cent planchet “appear to be correct based upon what I have seen, read and as compared to images in my digital library.”

“Carrying the reference to Ebenezer Mason a bit further, he [Mason] claimed that the 1793 unstruck half cent planchet was a part of his own collection,” Spurlock said. “It really is nice seeing something you have only read about.”

Another half cent specialist, Bill Eckberg, said at one time he owned a Type I blank (without upset rims) of the 1794 to 1795 type that possibly could have originated from the razing of the first Mint structure.

Concerning the 1793 Liberty Cap, Lettered Edge half cent planchet, Eckberg said the images of the edge show substantially upset or raised edges, which would be expected.

“The struck coins have beaded borders that are flat beyond the beads, and the edges are much flatter than seen on the unstruck planchet,” Eckberg said. “One wonders where that extra metal went during striking. It looks like there would be too much of it just to fill out the beads, which are pretty small relative to what looks like a good sized hump at the edge of that planchet in the photos.

“It should be forced outward, and we would expect that it would bulge the edge as the current view is that the coins were not struck in a collar, but all the 1793 edges that I’ve looked at were pretty flat.

“It seems that every discovery brings additional questions.” ¦