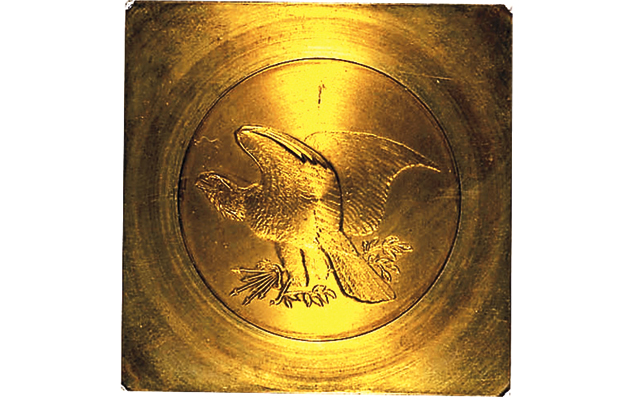 A rough cut hub reduction, in brass, bearing an eagle designed by U.S. Mint Engraver Christian Gobrecht has been authenticated by NGC.

All images courtesy of NGC. 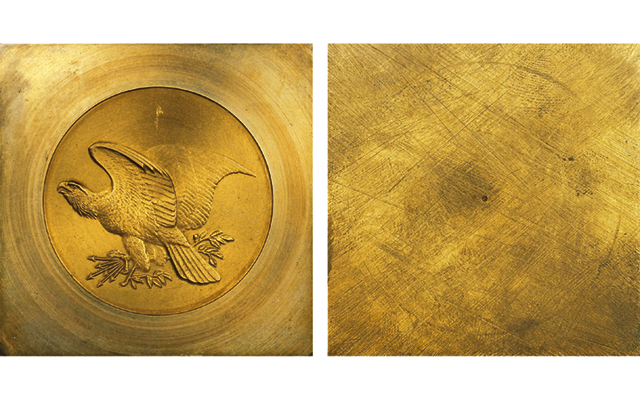 Both sides of the hub reduction exhibit circular lathe lines that would have been tooled away by U.S. Mint Engraver Christian Gobrecht on the actual steel hub before making any impressions from it.

All images courtesy of NGC.

A hub reduction is a transitional piece, between the sculptured model and the hub used to create coining dies.

NGC has graded the newly discovered hub reduction as NGC Mint State 65. Its composition is 64.5 percent copper and 34.7 percent zinc, with a few trace elements. The weight of this example is 74.1 grams.

The hub reduction just identified is square in shape, with a circular area or disc at the center bearing the hub design on one side. The item measures 51 millimeters across its flats. The disc portion containing the eagle impression has the normal 38.1-millimeter diameter of a silver dollar.

From ANA to NGC

According to NGC, the brass hub reduction was brought to the attention of the grading service through a student in NGC grader John Schuch’s American Numismatic Association Summer Seminar class in 2013.

The student, Alexandrea Zieman, told Schuch that her father, John Zieman Jr., owned an unidentified brass plate bearing an eagle and they believed it to be of U.S. Mint origin.

John Zieman Jr., it was learned, had documentation tying the piece to Robert Maskell Patterson, director of the Mint from 1835 to 1851.

The brass hub reduction was submitted to NGC by Alexandrea and her father when they attended the Florida United Numismatists Summer Convention in Orlando in July 2013.

“All that was known initially about the brass trial is that within its square was a hub image of silver dollar size depicting a Gobrecht eagle not known to have been used with any dollar patterns,” according to an NGC press release. “This same device, however, had been reduced to half dollar size for use on silver and copper half dollar patterns dated 1838. These are varieties Judd 80 and -81, respectively.

“That die marriage combined the Seated Liberty, No Drapery figure adopted for circulation the following year with a defiant eagle soaring upward, grasping a bundle of arrows in one claw and an olive branch in the other. This eagle die was not used with any other pattern strikings, and it is not known for any denomination other than the half dollar.”

According to NGC, to determine the authenticity, NGC sought out the most extensive collection of Gobrecht sketches and trial strikes, held in the National Numismatic Collection at the Smithsonian Institution’s National Museum of American History.

There, coin dealer, researcher and NGC consultant Jeff Garrett took photos of a hub trial and a die trial, both in brass, of the same eagle device.

“The only difference in design from the new specimen is that both of the Smithsonian’s trials had been reduced to half dollar size and were thus associated with the two known patterns, Judd-80 and Judd-81,” according to NGC. “There were no dollar size impressions of this eagle device.”

The Smithsonian pieces are illustrated in Elvira Clain-Stefanelli’s article “From the Drawing Board of a Coin-Engraver: Sketches by Christian Gobrecht for the Coinage of 1836-1839,” published in 1991 in The American Numismatic Association Centennial Anthology, edited by Carl W.A. Carlson and Michael Hodder.

Also illustrated with Clain-Stefanelli’s article are extremely similar sketches in Gobrecht’s hand of this eagle image, which was designed by artist Titian Peale.

The most significant difference between the trial impressions and the specimen recently certified by NGC is that the latter is not die struck.

“Instead, it is a roughly cut hub reduction made in brass from Gobrecht’s sculpted model,” according to NGC. “The circular lathe lines are present throughout the fields of both the square plate and the dollar-size disc within it featuring the eagle device.

“These would have been tooled away by Gobrecht on the actual steel hub before any impressions were made from it.

“Thus, the newly certified piece represents a transitional state between sculpted model and finished hub. Its reverse is plain and shows only some rough lines surrounding a center indent made to secure the plate within the lathe.”

The elder Zieman told NGC he acquired the brass piece and accompanying Patterson documents in May 2012 from a local picker/real estate liquidator who bought the contents of an estate in Homosassa, Fla.

Zieman indicated to NGC the estate’s contents had belonged to someone believed to be a seventh generation Patterson.

Knowing Zieman and his daughter collected coins and other numismatic items, the picker/real estate liquidator brought those items to the Ziemans.

John Zieman told NGC several transactions were made to acquire most of the items from the estate’ contents, beginning late in 2012.

Zieman said his goal is to keep all items together and allow others to see and learn from them.

NGC officials state that Zieman’s acquisitions comprise “an extensive assortment of objects and documents obviously from the estate of Robert Maskell Patterson.

“These include an engraved portrait believed to be that of Mr. Patterson’s father and the copper plate from which it was taken, a ring and several honorary certificates. Perhaps of most interest to numismatists is a letter from Chief Coiner Adam Eckfeldt to R. M. Patterson dated September 1, 1829 and reading as follows:

“‘The present private opportunity enables me to comply with my first intention of asking your acceptance of two specimens of the smallest coin of the United States.

“The issue having been made on the 4th of July 1829, it being the first of a new design, there having been very few struck on this day, are circumstances which together with our long acquaintance, friendly enter change [sic] of good feeling & interesting civilities form strong inducements to the affectionate.’ ”

At the time of this presentation, Robert Maskell Patterson was still six years away from being employed with the Mint, though he was no stranger to the institution, according to NGC.

Robert Maskell Patterson’s father, Robert Patterson, had been Mint director from 1806 until his death in 1824.