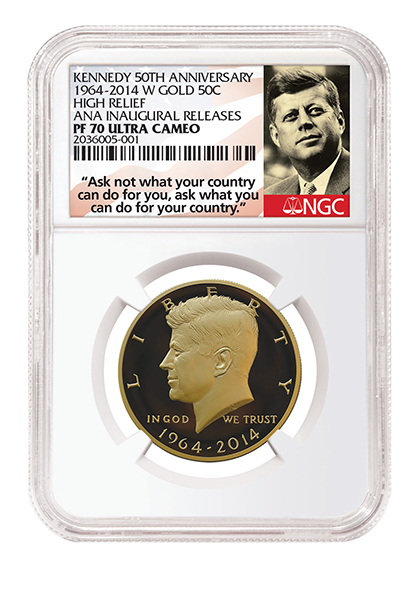 Numismatic Guaranty Corporation (NGC) has announced a special large-sized certification label to enhance the presentation of the popular Kennedy Half Dollar 50th Anniversary commemoratives. The NGC label features an iconic portrait of John F. Kennedy, the 35th president of the United States, along with his famous quote: “Ask not what your country can do for you, ask what you can do for you country.”

All of the 50th Anniversary Kennedy Half Dollars feature the original higher relief design used for the 1964 Kennedy half dollars. The gold half dollar is further distinguished by the dual dates of 1964 and 2014, reminiscent of the 1776-1976 bicentennial Kennedy half dollar.

Kennedy coins received by NGC within the first 30 days of their release are eligible for the “Early Releases” designation.

To learn how to submit these coins to NGC for the attractive Kennedy 50th Anniversary label, visit the NGC website: NGCcoin.com/Kennedy50