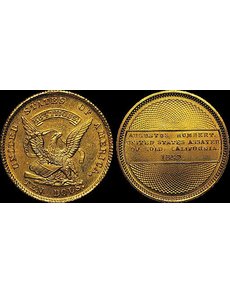 Graded Mint State 68 by Numismatic Guaranty Corp., the 1852 Augustus Humbert, United States Assayer of Gold, Close Date gold $10 piece is the finest known. The coin from the Eric P. Newman Collection is being offered at auction.

All collection images courtesy of HeritageAuctions.com. 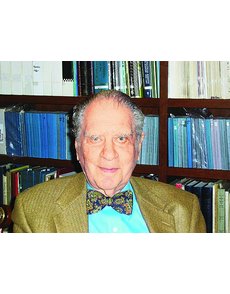 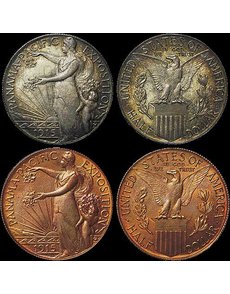 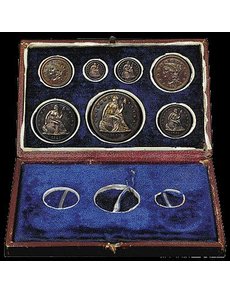 Coins from an original set of Proof 1845 coins in silver and copper will be offered individually. The original case will also be sold separately. 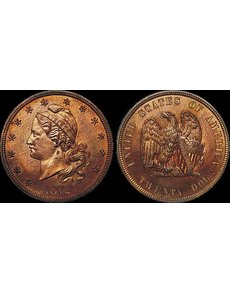 In total, 162 lots of numismatic material from the Eric P. Newman Collection, all but 18 representing U.S. coin patterns, will be offered by Heritage Auctions April 25 in Schaumburg, Ill.

The lots from the Newman collection will be offered during the April 24 to 28 auction held in conjunction with the Central States Numismatic Society 74th Anniversary Convention.

“The Newman specimen of the 1852 Humbert ten dollar is one-of-a-kind,” said Jim Halperin, Heritage co-chairman. “We expect fierce bidding from collectors who will know that not only will they be getting the single finest territorial gold coin known, but the money the Eric P. Newman Numismatic Education Society receives will be used to benefit the public and support further research into the history of coins.”

The Newman lots are currently scheduled to be sold Thursday, April 25, in the late afternoon or early evening, in a separate session immediately preceding the firm’s Platinum Night session.

Proceeds from the sale of the 162 lots will be used by the not-for-profit Eric P. Newman Numismatic Education Society for the benefit of other not-for-profit institutions selected by the society for public purposes, and also for supplementing the society’s own operations at its Newman Money Museum and scholarly research efforts.

The Newman Money Museum is located at Washington University in St. Louis.

While 101-year-old numismatist Eric P. Newman is well known for his expertise on paper money and coins of Colonial America, his 90+ years of collecting interests have also included U.S. coin patterns.

All of the patterns, coins and error coins from the Newman collection are graded and encapsulated by NGC.

Among the patterns are two 1915 Panama-Pacific International Exposition half dollar patterns without the S Mint mark found on the regular coins — one struck in silver, Judd 1961 (United States Pattern Coins, Experimental & Trial Pieces by J. Hewitt Judd, edited by Q. David Bowers), and one in copper, Judd 1962.
While the patterns were struck at the Philadelphia Mint, the regular commemorative coins were struck at the San Francisco Mint and bear the facility’s S Mint mark.

Both the silver and copper 1915 patterns have reeded edges.

“Pattern coins of the twentieth century are rare, and opportunities to own them rarer still,” Halperin said. “The 1915 Panama-Pacific half dollars without Mint marks were struck in gold, silver, and copper, but for each metal, fewer than four examples are known.”

In addition to the Humbert pioneer gold rarity and the patterns, the Newman offering includes an 1845 Proof set in its original presentation case of issue, with two coins in copper and five silver issues.

The coins in the set are:

The seven coins from the Proof set, as well as the coin case, are to be offered in separate lots.

Newman is the author of The Early Paper Money of America, 1776 Continental Currency & Varieties of the Fugio Cent, Coinage for Colonial Virginia and, with Ken Bressett, co-author of The Fantastic 1804 Dollar. Books were not his only contributions to literature; the American Numismatic Society dedicated a 2011 issue of ANS Magazine to Newman’s extraordinary achievements, and included a bibliographic listing of his published works. The listing ran more than six full pages. Newman’s assistance to other numismatic researchers is immeasurable.

As noted, the Newman patterns will dominate the upcoming auction in terms of the number of pieces offered.

Among other Newman patterns to be offered are:

“Eric P. Newman is a titan of numismatics and one of the hobby’s greatest treasures,” Halperin said. “This sale will help many worthy causes, including Eric’s tradition of adding to our knowledge about the history of money.

“The Newman family’s generosity is nothing short of inspiring.”

Check the Heritage Auctions website at www.ha.com for additional information. ¦