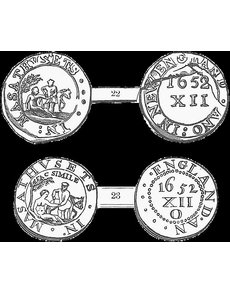 The two varieties of Good Samaritan “shillings” were illustrated in Crosby’s The Early Coins of America.

The shilling first surfaced in the United States when it appeared in the 1882 auction of the Charles Bushnell Collection, cataloged by brothers Henry and S.H. Chapman. Loren Parmelee of Boston bought it for $650 — the highest price of any coin in the auction, and also the approximate value of an 1804 dollar in 1882! Many collectors, however, smelled a rat.

One dealer, Ed Frossard, dismissed the Bushnell example as “bogus and modern.” Its reputation diminished, the Bushnell shilling next sold at auction, in 1890, for only $210. Yet, it was purchased by a respected numismatist, Hillyer Ryder, and was listed and illustrated in A Guide Book of United States Coins from 1947 to 1960 as a genuine Massachusetts silver coin pattern.

So was it real or bogus? Enter Mr. Newman, who in 1959 decided to solve the mystery. He consulted original sources, discovering that the shilling first appeared in the collection of Thomas Herbert, the eighth Earl of Pembroke. Although Herbert died in 1733, the engraved plates illustrating his collection were not offered for sale until 1746, and the coins themselves not auctioned until 1848. The Pembroke and Bushnell shillings were of two different varieties, both depicting the scene of the Good Samaritan helping the injured traveler, but the Pembroke shilling had the legend FAC SIMILE over the scene, while the Bushnell example did not. Then Newman examined the Massachusetts law of 1652, and proved that neither variety was ever authorized by the colony. He then demonstrated that the Pembroke example was in fact a genuine Massachusetts Pine Tree shilling that had been counterstamped with the Good Samaritan scene, and that the Bushnell shilling was a fraud, copied from the Pembroke shilling, but omitting the FAC SIMILE legend. Eric also traced the source of the Good Samaritan scene, which came from the seal of the Commission of the Sick and Wounded Prisoners (founded in 1664).

I cannot do full justice, in a short column, to the brilliance of Eric’s investigations in exposing these two “shillings” as frauds (not “counterfeits” since there never had been such a thing as a genuine Good Samaritan shilling), but I can say that the impressive research is delivered with Eric’s signature dry wit that makes it a joy to read. For instance, he dismisses a struck copy of the Bushnell shilling as a “muled restrike of a reproduction of an erroneous drawing, copied from a conjured illustration of a genuine coin,” and concludes that all of this made it “the ‘fakest’ coin in history!” The Secret of the Good Samaritan Shilling is available from numismatic booksellers, and will be among the “bestest” numismatic books you’ll ever read!