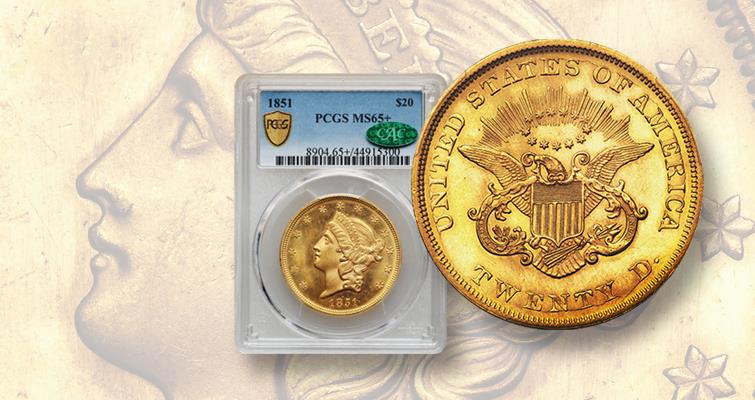 Newly discovered, this 1851 Coronet gold $20 double eagle is the finest known, graded MS-65+ by PCGS with a green CAC sticker. 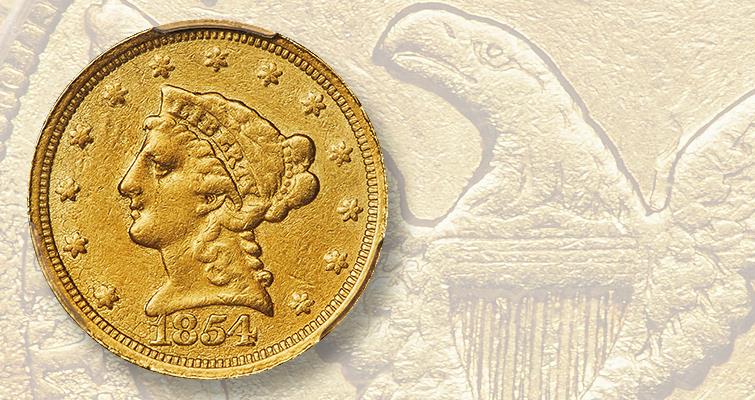 Heritage has some significant gold coins at its Dec. 15 to 18 U.S. Coins Signature Auction in Dallas as the 2022 auction season winds down.

Especially exciting is an 1854-S Coronet gold $2.50 quarter eagle graded Very Fine Details, Repaired, by Professional Coin Grading Service that represents the first issue of the denomination struck at the San Francisco Mint. PCGS estimates that a dozen or so survive from an original mintage of 246, making it one of the lowest-mintage regular issue coins struck for circulation.

Heritage praises the sharp remaining detail, characterizing the coin as “actually one of the finest known” in terms of sharpness, adding, “a couple of planchet depressions are seen in the upper left obverse field.” No Mint State survivors remain, and the finest example grades only About Uncirculated 50.

The cataloger looked at images of the same coin from earlier auction appearances that show hairline scratches across the prominent flaws in the planchet, “but they are less evident now” (presumably responsible for the “Repaired” notation by PCGS). Heritage noted “a distinctive slender mark above star 13 is a primary identifier.” The description relates the shallow cracks in the planchet with a shortage of parting acids on the West Coast in 1854, when the San Francisco Mint opened, stating, “Our theory is that the network of cracks seen on this piece may have something to do with impurities in the ore from which the coin was struck.” It may have been impossible at the time to completely separate the gold from impurities in the native alloy, and the Mint-made defects resulted from these impurities in the gold ore.

This storied S-Mint issue has a provenance that goes back to B. Max Mehl’s June 1946 sale of the William Cutler Atwater Collection. It has been offered at least three times at Heritage this century, selling for $69,000 in 2005, going unsold at a reserve of $150,000 in 2010, and bringing $87,000 at Heritage’s Aug. 14, 2019, offering of the Poulos Family Collection where it was in a Numismatic Guaranty Corp. holder graded AU Details, Scratches, Cleaned.

Contrasting with the problem surfaces of the 1854-S Coronet quarter eagle, the Heritage sale’s 1851 Coronet $20 double eagle is the sole finest-known of the issue and graded PCGS MS-65+ with a green Certified Acceptance Corp. sticker recognizing the eye appeal.

The denomination was first struck for circulation in 1850, and a hefty mintage of more than 2 million pieces in 1851 helped consume the significant amount of gold coming out of California during the Gold Rush. Gold specialist Doug Winter estimates that 2,500 to 3,500 of the 1851 Coronet $20 coins exist today in all grades, with optimistic estimates suggesting that no more than 300 are in Mint State, with most of those grading MS-60 to MS-62.

The offered coin is presented as a new discovery, with the consignor sharing with Heritage, “My great-grandfather lived in Marblehead, Massachusetts, & owned a general store. When [Franklin] Roosevelt requested gold coins be returned to the Federal government, he put his coins in a safe deposit box. My grandmother and mother saved the coins. They were passed on to ... me.” The next-finest at the grading service are five submissions at the MS-64 level.

The fresh-to-market coin has a bold strike, with evidence of die polish in the fields. “Fulsome luster and a minimum of abrasions account for the unmatched technical assessment,” the cataloger writes, recommending that bidders be prepared for a record price for the issue when it’s offered at the Dallas sale. 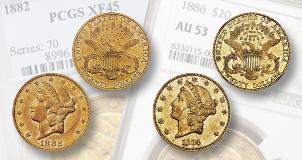 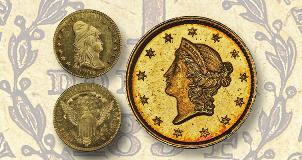 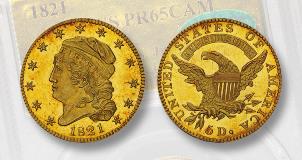