Newcomers are key to the future of coin collecting 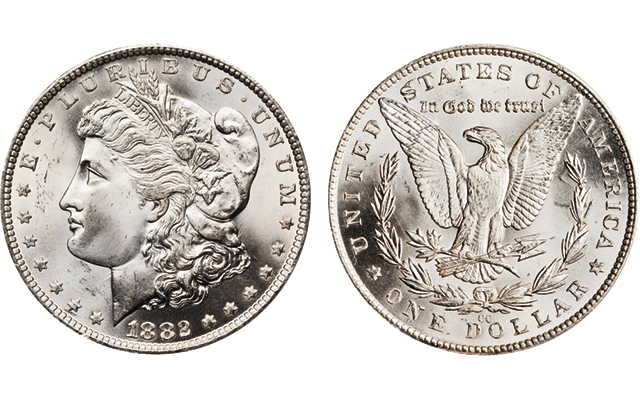 Newcomers are the key to the future success of our hobby. For such people, a wide world of challenge, camaraderie, and enjoyment awaits.

Try this idea: Buy as a gift an 1882-CC Morgan silver dollar certified in Mint State 63 or finer grade. This will cost several hundred dollars. The market for these is very active, and should your lucky recipient not find it interesting, it can be resold easily.

Of the various Mints, the Carson City facility, active from 1870 to 1885 and again from 1885 to 1893, struck silver and gold coins, mostly from metal mined in the famous Comstock Lode in and around Virginia City, Nev. Mintages were modest for most issues, but there were exceptions, of which the 1882-CC Morgan dollar was one. Production totaled 1,133,000 coins. These and other Morgan dollars were produced under the Bland-Allison Act of Feb. 28, 1878, a political boondoggle enacted to please Western mining interests.

The price of silver had fallen on international markets, and it was thought if Uncle Sam would buy millions of ounces of the metal each month this would prop up the market. There was no need in commerce for so many coins, so most were piled up in vaults.

Generations later a strong interest developed in collecting Morgan dollars. Lo and behold! In the Treasury Building were found many 1,000-coin bags of bright 1882-CC Morgan dollars, among other issues. An inventory taken in March 1964 showed 605,029, or 53.4 percent of the original mintage, on hand, even though many others had been paid out in recent years. These were auctioned by the government and went into the hands of collectors.

As a result, a beautiful 1882-CC dollar is very affordable today. Adding to the desirability is that most are well struck, have great eye appeal, and have the aura of the “Wild West” Carson City Mint.

Add to this gift a subscription to Coin World, a copy of the latest edition of A Guide Book of United States Coins, a membership in the American Numismatic Association, and a copy of my Whitman book, The Official Red Book of Morgan Silver Dollars: A Complete History and Price Guide.

My guess is that the lucky recipient of the above will dig into the books and Coin World, will discover the world’s greatest hobby, and go on to enjoy and learn about coins in many series.