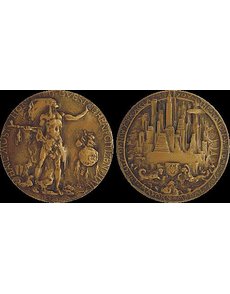 Bronze medal lacking a date of issue by sculptor Frederick William MacMonnies produced for the City of New York is known as the “Mayor’s Medal.”

“Hail Most Honored Guest, Great Citizen Hail!” proclaims the obverse of a little-known, undated 102-millimeter bronze medal designed by sculptor Frederick William MacMonnies. It seems certain that this medal was designed for presentation when world celebrity was measured by the New York City ticker-tape parade.

Electronic media were first capturing the attention of the world through radio and the news reel, as a succession of military leaders, European royalty, statesmen, sports heroes, aviators and scientists made the ride up Broadway.

On June 13, 1927, New York welcomed “Lone Eagle” Charles Augustus Lindbergh, home from his harrowing trans-Atlantic New York to Paris flight in the Spirit of St. Louis. The crowd was immense, and more than 1,800 tons of ticker tape and shredded phone books descended on the parade. Grover Whalen later emerged as the city’s official greeter and became “Mr. New York” to much of the world.

The imposing Mayor’s Medal would have played a key role in these boisterous events. Born in 1880, medal designer MacMonnies began his career as assistant to Augustus Saint-Gaudens in his New York studio while pursuing studies at the National Academy of Design and Art Students League. His artistic education continued in Paris at the Écôle des Beaux-Arts, and the French Republic later made him a chevalier of the Legion d’Honneur.

He created the heroic statue Columbia for the 1893 World’s Columbian Exposition in Chicago, Civic Virtue at New York City Hall, William Shakespeare for the Library of Congress, and Army and Navy groupings for the great arch at Brooklyn’s Prospect Park and Denver’s Pioneer Monument.

An Indian theme graces the Mayor’s Medal with its obverse bearing a standing chief in Plains Indian feather headdress and fur loin cloth, holding a peace pipe. At right is a trophy composed of a stone axe, arrows, quiver and dream catcher shield with sun rising at left over stylized water. Below is the year 1609, indicating the year Henry Hudson’s expedition brought the first Europeans to the region.

The reverse is a montage of Manhattan skyscrapers and bridges, many identifiable, some generic. Below, mermaids and sea god Neptune support the city arms, while the outer legend announces, THE CITY OF NEW YORK ACCLAIMS YOV. THE NATION WELCOMES YOV. MAYOR’S MEDAL.

Neither side bears a date of issue or production.