New Type II counterclash on 1985 cent only sixth of its 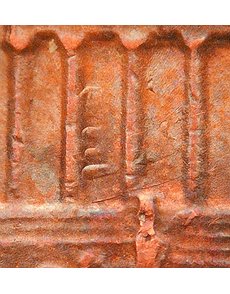 Two inverted copies of the letter E (from E PLURIBUS) adorn the reverse face of this 1985 Lincoln cent. They represent a Type II counterclash. 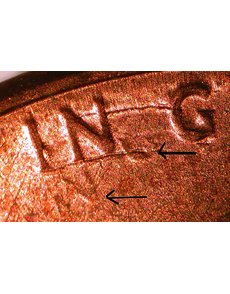 This image of the No. 2 counterclash 1983 Lincoln cent highlights the letters N (from the lower row) and G (from the upper row). 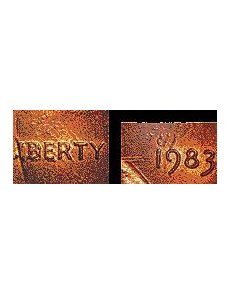 A second 1983 Lincoln cent (CLO-001) shows a double counterclash in the form of two sets of the letters IBER. One set is slightly offset from the normal letters while the second set is located above the date.

Among the rarest and most desirable forms of die damage is the Type II counterclash. Such errors occur when a chunk of unusually hard metal is struck twice, with movement between strikes.

The first strike leaves the fragment with a set of raised design elements. The second strike transfers the raised elements on the fragment back to the die face. Usually only the field picks up an impression, as this portion of the die face is most vulnerable to damage. Every coin struck afterward has a set of raised, normally oriented design elements in an unexpected location.

It should be noted that only a remote relationship exists between the two types of counterclash. A Type I counterclash is a form of close, raised doubling that is simply an occasional side effect of multiple, staggered clash marks (see “Collectors’ Clearinghouse,” Dec. 13, 2010).

Recently, veteran die variety researcher Robert (“BJ”) Neff sent me a 1985 Lincoln cent with an unreported Type II counterclash. It was discovered by Joe Koelling, who adds this coin to a long string of previous discoveries.

As shown in the accompanying photo, the coin actually shows a double counterclash. The E of E PLURIBUS appears twice on the reverse face within the Lincoln Memorial. Both letters are upside-down, relative to the rest of the reverse design. They sit one above the other within the second bay from the left in the memorial. The lower E is considerably stronger than the one above.

The two letters might represent two successive impressions from a second and third strike (with the fragment shifting position between strikes).

Alternatively, the fragment may have already been double-struck, with the two letters being transferred to the die face during a single subsequent strike.

Interestingly, the area around the normal E PLURIBUS shows no signs of damage, leaving open the possibility that the fragment was struck in a different striking chamber.

Several other Type II counterclashes show two sets of raised design elements. It has long been acknowledged that the less dramatic counterclash 1983 Lincoln cent shows the N GO of IN GOD in two rows that are quite close to each other and to the normal motto (see photo). This counterclash is cataloged as CCL(TII)-1c-1983-02 on www.maddieclashes.com.

Few are aware that the other counterclash cent from 1983 also shows two sets of letters. Listed as CCL(TII)-1c-1983-01, this second 1983 Lincoln cent shows the inverted letters IBER above the date. It also shows close doubling of the same letters in the normal version of LIBERTY. Previous authors had generally attributed this doubling to nameless “damage.” But it’s clear to me that this is also a Type II counterclash.

What evidently happened is that a die fragment broke off the reverse die (the coin shows a “cud” on this face). It bounced over to the left side of the striking chamber where it was struck twice by the obverse die (the reverse die was most likely protected by a planchet). The fragment moved slightly between the first and second strike, producing the first counterclash. The die fragment then bounced over to the right side of the striking chamber where it received a third strike.

That strike transferred the letters from the fragment to the field above the date as the second counterclash.

Confined to one face

Turning back to the 1985 Lincoln cent, we find that the counterclash — and all other related signs of impact damage — are confined to one face. This is true of every other counterclash currently identified. It would seem that in every instance the opposite die was protected from damage by an intervening planchet.

Next to the two E’s, we find erratic die damage in the form of two thin curved lines below the letters and two small bumps in the bay to the right of the one occupied by the letters. The two curved lines may mark the edge of the metal fragment.

Erratic die damage is found in close association with most Type II counterclashes except the 2000-P Sacagawea dollar and 1999-P Delaware quarter dollar.