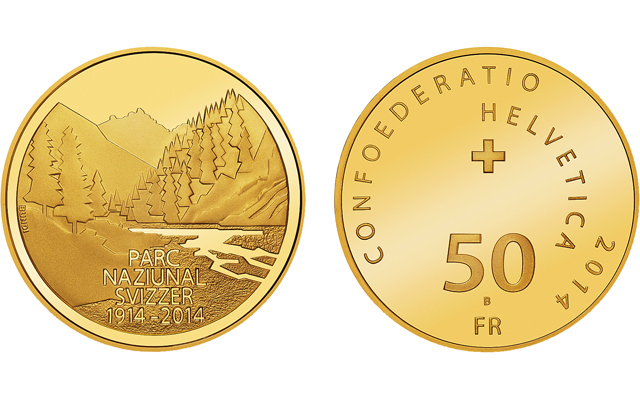 A new gold coin from Switzerland celebrates the nation’s national park. The Proof 50-franc coin is struck from .900 fine gold and has a mintage limit of 6,000 coins.

Switzerland’s famous Alpine mountain vistas draw hundreds of thousands of tourists annually, but only 6,000 collectors will be able to capture that spirit on a new gold coin showing the nation’s park on its centennial.

Swissmint, the federal agency that strikes coins for Switzerland, on May 22 released a new Proof gold 50-franc coin to mark the 100th anniversary of the founding of the Swiss National Park.

One century ago, “visionary pioneers” from the Swiss Nature Conservation Committee made their dream come true by creating an “open-air laboratory” where a piece of Swiss mountain landscape could develop free from human influence, according to Swissmint.

“This move was justified by the radical social change of the 19th century and the invasive development of tourism at the beginning of the 20th century, which had clearly left their mark.”

The obverse side of the gold coin, designed by Stephan Bundi, shows Trupchun Valley. Renowned for its wealth of fauna, this high-lying valley attracts many visitors to the national park during the deer mating season.

The reverse carries the denomination, year of issue and inscriptions.

Distributor Coin & Currency Institute had not established a price at press time.