New Martha Washington dies in use for tests 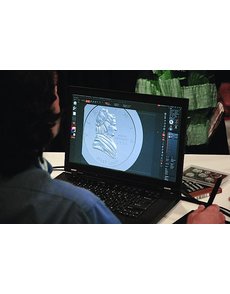 This Martha Washington digital design was executed by U.S. Mint Medallic Artist Joseph F. Menna several years ago to create dies for testing laser alignment and vision applications. Yet another Martha Washington design is in use now. Coin World image by Paul Gilkes. 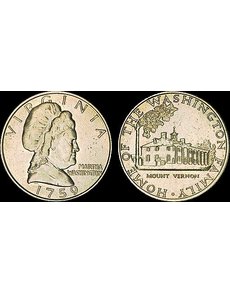 The Martha Washington, Mount Vernon designs as shown on this half dollar-size test piece have since been modified for dies the U.S. Mint employs during current metallurgical research and development, in the search for coinage alloy alternatives.

The U.S. Mint is using modified Martha Washington and Mount Vernon designs on dies for current testing of alternative alloys for the composition of the nation’s coins.

However, Mint officials won’t disclose details about the designs until after the research and development is completed to meet a congressional deadline in mid-December.

At the U.S. Mint booth at the American Numismatic Association’s World’s Fair of Money in Philadelphia in August, U.S. Mint Medallic Artist Joseph F. Menna had displayed on his laptop screen an image of a Martha Washington test die obverse design he created several years ago for testing. That image is illustrated with this article.

According to U.S. Mint spokesman Michael White Aug. 16, Menna’s Martha Washington design is not the design being used to produce dies for the current alternative coin compositions research.

Menna’s creation, according to White, is a digital design that differs in execution from the old Martha Washington obverse first used for compositional test strikes under provisions of the Coinage Act of 1965 and used later for testing alloys in 1999 for the Sacagawea dollar.

Several years ago when the Mint was testing laser alignment and vision applications, Menna executed the obverse Martha Washington digital design. He produced an obverse design only; no reverse design was produced. (White said the Mint uses a vision system to align and guide the laser used during the die frosting operations on Proof dies and in testing.)

Menna’s Martha Washington obverse design features a portrait of the first lady facing right, with VIRGINIA along the top border, FIRST LADY along the bottom border, and in the field in front of the portrait in three lines, MARTHA / WASHINGTON / 1759.

The former Martha Dandridge Custis and George Washington married in 1759.

White said the U.S. Mint has produced new digital Martha Washington obverse and Mount Vernon reverse designs, different from Menna’s design, from which test dies were made for use in the current alternative compositions research.

White said the new designs have not been made public but closely resemble the actual circulating coin designs in order to test metal flow and fill.

White said the newest versions of the Martha Washington and Mount Vernon designs being used to strike the test alloys are very similar to the actual coin denominations in circulation today in terms of placement of devices, orientation, height of relief and other factors.

The new designs used for test strikes were executed by a design specialist who converts the digital design into a format to be CNC (computerized numerical control) engraved, White said.

Grove, a sculptor, medalist and bank note engraver, was a close friend of Chief U.S. Mint Engraver Gilroy Roberts. Roberts convinced Grove to accept a vacancy on the Mint’s engraving staff at the Philadelphia Mint in 1962.

Fowler is credited as the artist for the Mount Vernon reverse used in 1965 and 1999.

Examples of experimental test strikes from the 1965 and 1999 research have entered the marketplace.

A two-year study being conducted under the contracted oversight of Concurrent Technologies Corp. is nearing completion, with the findings and recommendations to be submitted to Congress by Dec. 14. The testing is being conducted according to provisions of the Coin Modernization, Oversight, and Continuity Act of 2010, Public Law 111-302.

The study is analyzing the compositions of all U.S. circulating coin compositions, with primary focus on the copper-plated zinc cent and copper-nickel 5-cent coin, both of which cost more than double their face value to produce at the Philadelphia and Denver Mints.

The U.S. Mint is also trying to identify through its research potential suppliers for ready-to-strike planchets. Currently, Jarden Zinc Products in Greeneville, Tenn., is the U.S. Mint’s only supplier of finished planchets for Lincoln cents.