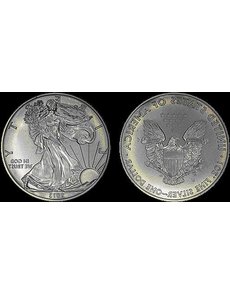 Stage 1 dies for the Enhanced Uncirculated 2013-W American Eagle silver dollars are unfinished when they are received from the Philadelphia Mint. 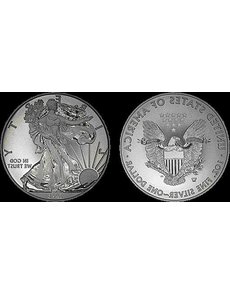 During Stage 5, the dies are subjected to ultrasonic cleaning to remove oxide build-up acquired during the previous steps, before receiving a chrome nitride layer that will double the life of the die.

The procedures the U.S. Mint follows to prepare the dies used to strike the Enhanced Uncirculated 2013-W American Eagle silver dollars are part of an extensive process. Multiple operations must be executed to create the desired final finishes found on the coin.

Working dies for the West Point Mint are fabricated at the main Philadelphia Mint, then shipped to the West Point facility where they receive the final finishing steps, which involve polishing and generating different intensities of laser frosting.

The production process for the dies can be separated into five stages.

Stage 1 produces the raw working dies as they are received at the West Point Mint from the Philadelphia Mint.

For Stage 2, the entire face of the obverse or reverse die is subjected to manual and automated horse hair brushing as a preliminary polishing and cleaning step. The manual polishing is completed first to get the difficult details, and then the automated polishing is used to give all areas a consistent finish, according to Mint officials. Manual polishing achieves a consistent finish in the areas that are harder for the auto polisher to reach, Mint officials state.

When manual horse hair brushing is used, only one die is brushed at a time. The system used for auto brushing allows up to 10 dies to be installed in a rotating carousel. The automated horsehair brush process creates a reflective surface of artwork elements.

For Stage 3, the fields on the Enhanced Uncirculated 2013-W American Eagle’s obverse and reverse are given their light frosted finish.

Each side will also have two other finishes, generated in Stage 4. At Stage 4, on the obverse of the coin, a brilliant polished finish is executed on the mountains, what would be the red stripes and blue field of the U.S. flag, the date and Liberty’s sandals. The remaining elements and lettering on the obverse are given the standard heavy frosted finish. Also during Stage 4, on the reverse, the ribbon in the eagle’s beak, the arrows and the oak branch are given a brilliant polished finish. The lettering and other design elements on the reverse are given the heavy frosted finish. Also, the border and stripes on the shield are polished.

Trays of dies from Stage 4 traverse through a series of ultrasonic cleaning stations before being dried and readied for the PVD step. Bill Giraud, supervisory engraving engineer at the West Point Mint, says the ultrasonic cleaning removes any oxide layers that have built up on the face of each die during the laser frosting execution. Giraud said the dies need to be perfectly clean for the thin layer of chrome nitride to properly adhere to the die face during the PVD procedure in Stage 5.

PVD is a process that involves evaporation and deposition of a material. A thin chrome nitride film is applied by the Mint through the PVD technique known as “sputtering” within a high-intensity magnetic field. The film helps to protect the dies during striking, by adding lubricity that reduces friction that could cause die degradation, according to Mint officials.

The PVD process is more environmentally safe than the hexovalent chrome process once used by the Mint, according to the Mint.

The finished dies for the Enhanced Uncirculated coins are installed vertically on Gräbener GMP 360 presses. The hammer die imprints the obverse and the anvil die the reverse.

The Enhanced Uncirculated coins are struck three times on specially burnished planchets, with a striking pressure of 210 metric tons per strike to bring up design details. Before striking, the planchets for the coin are burnished using steel shot, soap and water. ¦