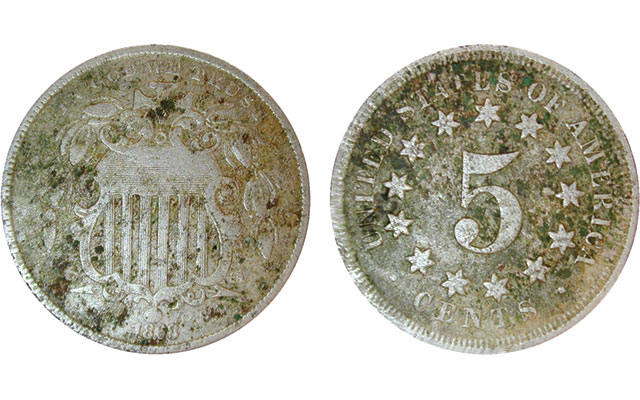 This 1868 Shield 5-cent coin was found by the author in a roll of modern-day Jefferson 5-cent coins.

A piece that was the same size as the rest of the “nickels” in one of the rolls was a crusty, pitted, greenish brown blob of metal that had very few identifiable portions visible. While I did not use the best methods of coin conservation available, I was able to remove enough of the ugly encrustation to identify the coin.

Admittedly I was not too careful as I “conserved” this piece, soaking it in vinegar, brushing it with a toothbrush full of toothpaste, and scouring it with an abrasive cleanser. The cleanser was the stuff that for many years was advertised with the slogan, “It shakes out white and turns blue.” OUCH!

The fact is that my extreme methods of crust removal were not going to decrease the value of this coin, and without my efforts I would never have learned the date that this coin was minted.

While I could tell by the few stars visible that this piece was a Shield 5-cent coin, the scrubbing made the date 1868 identifiable. Even though this 5-cent piece showed much evidence of having lived a rough life, finding a 147-year-old coin in a roll was a real thrill!

Fascinated by the 1868 date, I had an uncontrollable urge to place the coin in its proper historical context. I wanted to see what was going on during the year of 1868. For me the most interesting historical information had to do with the impeachment of then president of the United States, Andrew Johnson.

Some interesting dates were:

Feb. 24, 1868: Shortly after President Johnson’s dismissal of Secretary of War Edwin M. Stanton over differences on Reconstruction, the House of Representatives voted 126 to 47 in favor of a resolution to impeach Johnson.

March 5, 1868: The U.S. Senate organized a court of impeachment to hear charges against Johnson.

May 16, 1868: Johnson was acquitted by only one vote during his impeachment trial!

It just amazes me that a coin that was minted and circulated during a period of such political turmoil could still be found in a roll this many years later. Could it have been in the pocket of one of the senators who tried to impeach Johnson? That’s a fun thought.