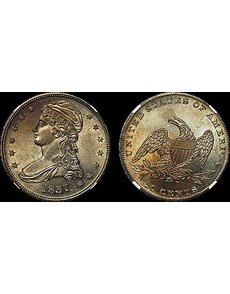 A new die marriage has been identified for the 1837 Capped Bust, Reeded Edge half dollar, struck from a previously unidentified pairing of known obverse and reverse dies. 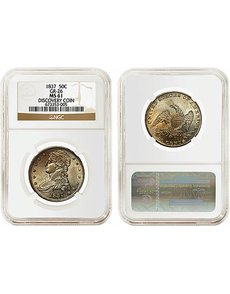 The NGC label identifies the example as a “Discovery Coin.”
Previous
Next

A previously unknown variety representing a new die pairing of the 1837 Capped Bust, Reeded Edge half dollar has been identified.

The coin was submitted to Numismatic Guaranty Corp. by Heritage Auctions on behalf of collector and owner Charles Link, who is well-known in Bust half dollar circles, according to Heritage.

NGC announced on Sept. 11 that it had labeled the coin as a “Discovery Coin” and graded it Mint State 61.

The half dollar has been given the number GR-26. GR references the numbering system that organizes Dick Graham’s 2012 book A Registry of Die Varieties of Reeded Edge Half Dollars 1836–1839. This text expanded on Jules Reiver’s 1988 work, Variety Identification Manual for United States Reeded Edge Half Dollars 1836–1839, which drew on the research of Martin Beistle in the early 20th century.

Mark Borckardt, senior cataloger at Heritage Auctions, described the importance of the find, telling Coin World, “The Capped Bust, Reeded Edge half dollars were the first coins struck on the new steam presses. For decades, the series has been understudied, except by a handful of specialists. However, there are many extremely important and rare die varieties.”

Unlike the production of the Capped Bust, Lettered Edge half dollars that preceded them, the dies for the successor Capped Bust, Reeded Edge coins were almost completely hubbed, with the final numeral of the date being the only hand-punched element.

The hubbing of a nearly complete design eliminated much of the variability found on the dies used to strike the Lettered Edge half dollars, where various design details were added by hand. That variability resulted in distinct changes from die to die, which collectors have found fascinating since they began collecting the series. Die varieties are easier to identify on the Lettered Edge coins than on the Reeded Edge half dollars.

In addition, the Reeded Edge coins were struck within a close collar, while the Lettered Edge coins were struck within an open collar. The close collar formed the edge reeding at the moment of striking. The edge inscriptions on the earlier coins were added in a separate production step, before striking. The open collar was slightly larger than the intended diameter of the coin, thus diameters of the Lettered Edge half dollars vary slightly.

Upon the publication of Graham’s 2012 book, NGC officials noted, “The distinguishing points of Reeded Edge Halves are thus very subtle, and these coins may be challenging to attribute in grades below Very Fine 20,” adding, “It’s suggested that submitters bear this in mind when selecting coins for variety attribution.”

Borckardt also said that the short series offers discoveries awaiting sharp-eyed collectors and that more Capped Bust, Reeded Edge half dollar varieties are likely to be found in the coming years. ¦