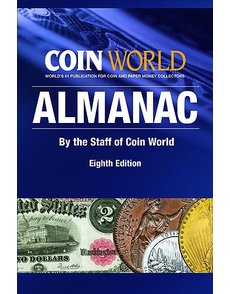 The eighth edition of the Coin World Almanac. is now available for purchase. The 2011 reference, the first published since the Millennium Edition was released in 2000, is thoroughly revised and updated.

The eighth edition of the Coin World Almanac. is a one-volume, nearly 700-page reference that places vital facts about the field of coins, paper money and related objects at the user’s fingertips. The book features chapters on such topics as Numismatics and the Law, the United States Mint, U.S. Coins, World Coins, U.S. Paper Money, Counterfeit Coins, Grading Coins and more, including a bibliography of standard numismatic references.

Major revisions to the eighth edition include a new chapter focusing on counterfeit coins, including a brief history of counterfeiting and details about the counterfeiting of U.S. coins in China.

Individual chapters detail the history and operations of the Treasury Department, Federal Reserve, U.S. Mint and Bureau of Engraving and Printing. Each chapter includes details about public tours, a list of officials and more. The U.S. Paper Money chapter offers a history of U.S. paper money from the Colonial days to the present; biographies for every person depicted on federal, state, Confederate and obsolete paper money; a list of all signers of federal paper money; details about the features on modern Federal Reserve notes; and more.

The U.S. Coins chapter features a history of U.S. coinage from the Colonial era to 2011; specifications for all U.S. coins; details about the design of every coin, including designers; details about Mint mark locations on the coins; mintage figures for circulating, bullion and collector coinage, including complete breakdowns by individual Mint facility (featuring separate figures for coins lacking Mint marks but struck at multiple facilities); and much more.

Another chapter examines error coins and paper money, plus commonly seen forms of altered and damaged coins and notes that may masquerade as errors.

Precious metals and bullion coins are featured in two individual chapters. The former features the history of gold, silver and platinum, including historical pricing information. The latter chapter explores the many forms of precious metals bullion coins, and includes coin specifications.

Another chapter tackles the key area of grading. The grading chapter details the importance of grading both coins and paper money.

Additional chapters address coin rarities and investing in coins. The rarities chapter features mini-biographies of major collectors of coins and paper money; pedigrees for the 1804 Draped Bust silver dollar, 1913 Liberty Head 5-cent coin and 1894-S Barber dime; and a list of the 25 highest auction prices for every denomination of U.S. coin.

The book also discusses U.S. and world museums with numismatic collections; numismatic organizations in the United States and elsewhere that collectors may be interested in joining; and literature for collectors. A Potpourri chapter features a wide range of information about topics that do not fit into the other chapters.

The book closes with a glossary of numismatic terms and a detailed index.