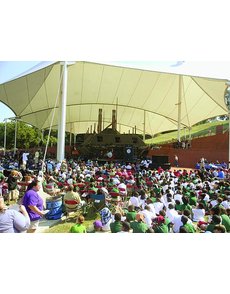 The U.S. Mint’s planning and staging of official launch ceremonies for America the Beautiful quarter dollars and Presidential dollars is in limbo.

The 2012 El Yunque National Forest quarter dollar was placed into circulation Jan. 23 through the Federal Reserve without benefit of a ceremony or other official recognition, and without any ceremony on the immediate horizon.

Mint officials have provided no definitive answers as to whether the Mint will conduct any further quarter dollar launch ceremonies or other form of recognition of a coin’s release.

Beginning in 2012, Presidential and Native American dollars will continue to be struck in circulation-quality, but in significantly smaller quantities and for numismatic sales only to collectors.

“Coin launch events are very important to the United States Mint,” according to a statement released Jan. 19 by Tom Jurkowsky, director of the U.S. Mint’s Office of Public Affairs. “They represent an exceptional form of outreach to a wide base of individuals — from collectors and children to historians and citizens who may have an interest in the place or person being honored. Launch events help us ‘connect America through coins’ as coins tell the story about our nation’s history, culture and traditions. Quite simply, coins form part of our nation’s financial fabric and launches represent an opportunity to tell our story.

“However, we must ensure when we do coin launch events that we do them in the most cost effective manner possible. Just as much as we have an obligation to tell our story, we are just as obligated to tell that story efficiently.

“Therefore, we are looking at our coin launch procedures and processes to ensure that we do them in the most efficient manner possible.”

Launch ceremonies for respective commemorative quarter dollar releases into circulation have been, for the most part, during the same week as the U.S. Mint’s initial offering of those same coins in circulation quality in rolls and bags at numismatic premiums. The same quality coins have been made available in generic wrappers at face value to ceremony attendees at the conclusion of each formal launch ceremony.

The dollar coin launch ceremonies have coincided, from 2007 through 2011, with the actual Federal Reserve circulation release.

The Federal Reserve release dates for the America the Beautiful quarter dollars in 2012 are:

The following dates represent the official release dates for the 2012 Presidential dollars that were announced before Geithner’s suspension of production for circulation. Mint officials have not said whether announced release dates will remain the same but be used for numismatic sales: