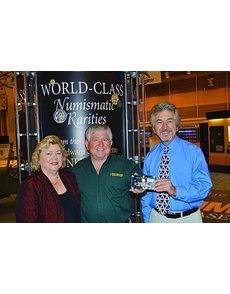 Larry Lee, center; his wife, Patricia; and Jeff Garrett, right, pose for the news media with the Walton 1913 Liberty Head 5-cent coin on the opening day May 9 of the American Numismatic Association National Money Show in New Orleans. Larry Lee and Garrett, who collaborated in the April 25 purchase of the coin in Heritage Auctions sale in Schaumburg, Ill., took possession of the coin after the convention.Image by Donn Pearlman. 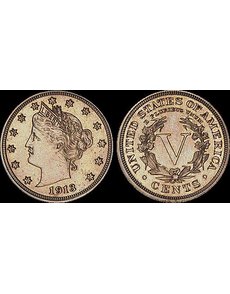 Florida dealer Larry Lee has been taking full advantage of being majority owner in the George Walton 1913 Liberty Head 5-cent coin beginning with its public display May 9 to 11 at the American Numismatic Association National Money Show in New Orleans.

Lee, owner of Coin and Bullion Reserves in Panama City, said he also plans to publicly exhibit the coin in his coin shop under security so more collectors may have the opportunity to see the most storied of the five 1913 Liberty Head 5-cent coins known.

The auction was held in conjunction with the Central States Numismatic Society 74th Anniversary Convention.

Lee said Garrett, a current ANA governor and one of six numismatic experts who authenticated the coin as genuine in 2003, arranged for the display of the coin in New Orleans. The coin has been housed and on display the past decade at the Edward C. Rochette Money Museum at ANA headquarters in Colorado Springs, Colo.

The coin remains in the same acrylic plastic holder that George Walton had custom-made for it more than 40 years ago. The Walton 1913 5-cent coin is certified Proof 63 by Professional Coin Grading Service, with the grading insert noting the Walton pedigree secured between the top two of the three sections of the holder. Walton purchased the coin from another collector circa 1945 or 1946 in a private transaction for a reported $3,750.

Walton was killed March 9, 1962, in a head-on automobile collision on a North Carolina highway while en route to a coin show. The 1913 5-cent coin was among the coins Walton carried in his briefcase, which was recovered from the accident site. Originally believed to be an altered date when considered for auction in 1963, the coin wasn’t confirmed as genuine until 40 years later.

The Walton 5-cent coin was the star attraction among the 6,537 lots of United States coins offered in the Heritage sale.

Bought on a whim

Lee said he “kind of bought the coin on a whim,” noting Garrett called him just 15 minutes before the auction seeking his answer as to whether to bid on the coin. Lee said he had just returned home from a fishing trip when he received Garrett’s phone call.

Less than an hour after Garrett informed Lee they were the successful bidders, the new owners started to receive offers to buy the coin.

“I don’t have a price in mind,” Lee said. “Anyway, it’s not for sale until I’m done with showing it to people. There’s such an incredible story behind this coin and I want to share it.”

Lee said he wants to be able to advertise the piece to have collectors come in and handle the coin in its holder at his Florida shop — under armed security, of course.

Lee said he’s also received some unexpected benefits of ownership, being able to buy some nice collections of U.S. coins from people aware of his purchase of the 1913 5-cent coin.

Garrett said owning a 1913 Liberty Head 5-cent coin is the dream of any collector.

“I know Larry likes and appreciates great coins, and we both consider this the greatest U.S. coin,” Garrett said. “Owning a 1913 Liberty nickel is the dream of any collector, and we were particularly attracted to the story of the Walton specimen. Stories are what make great coins, and this one has the best story in our opinion.”

Garrett said he broached the subject of possibly buying the coin when he called Lee several weeks ago to gauge his interest. And the decision came right down to the wire.

“Larry was very excited about buying the coin,” Garrett said. “He humbly mentioned to me that he remembers starting out buying 1913 Buffalo nickels. He never thought he would own a 1913 Liberty nickel! Purchasing the 1913 Liberty nickel has been a numismatic dream come true for me. I have told my local friends it’s like winning the Kentucky Derby!”

“We have been approached by a few dealers asking if the coin was available,” Garrett said. “Everything has a price, but for now we want to enjoy the journey for a bit longer.” ¦