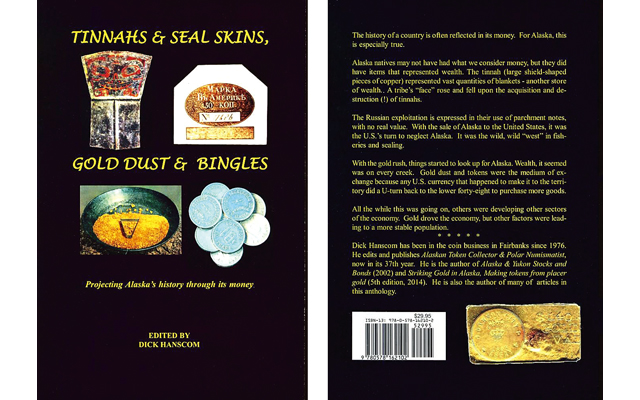 The following information is from a news release issued by Alaska Rare Coins about the release of a new book:

From the back cover:

"The history of a country is often reflected in its money. For Alaska, this is especially true.

"Alaska natives may not have had what we consider money, but they did have items that represented wealth. The tinnah (large shield-shaped pieces of copper) represented vast quantities of blankets. A tribe’s 'face' rose and fell upon the acquisition and destruction (!) of tinnahs.

"The Russian exploitation is expressed in their use of parchment notes, with no real value. With the sale of Alaska to the United States, it was the U.S.’s turn to neglect Alaska. It was the wild, wild 'west' in fisheries and sealing.

"With the gold rush, things started to look up for Alaska. Wealth, it seemed, was on every creek. Gold dust and tokens were the medium of exchange because any U.S. currency that happened to make it to the territory did a U-turn back to the lower forty-eight to purchase more goods.

"All while this was going on, others were developing other sectors of the economy. Gold drove the economy, but other factors were leading to a more stable population.

"For this anthology, articles have been gathered from many different sources. Some are not numismatic in nature, but they give information about a location or biography that I think enhances collecting enjoyment.

"Many articles have appeared in Alaskan Token Collector & Polar Numismatist over its 37 years. A number have been written by the editor. There are several articles that have been written specifically for this book. Most articles are illustrated with black and white photos."

The book is divided into 12 roughly chronological chapters:

The book is 396 pages, 9” by 6”.  The cover is full color with text printed in yellow on black. The paper-bound edition is available for immediate shipment for $29.95 postpaid by media mail, or $33 via priority mail (U.S. orders only. Please contact us for non-U.S. orders).

Hard-bound copies are available on a prepaid, special order basis for $70.  These orders will be accepted until June 15.  Delivery will be made in July.