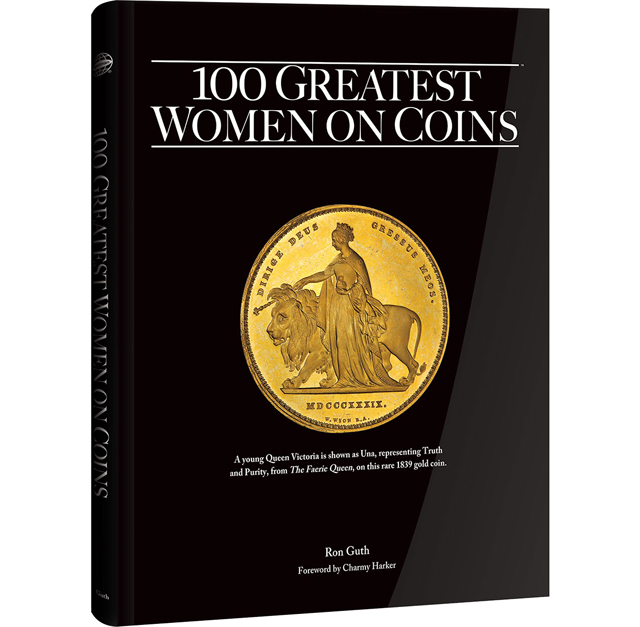 Whitman Publishing is honoring the U.S. Treasury's announcement that a woman will begin appearing on the $10 bill in 2020 with a new coffee-table book, '100 Greatest Women on Coins.'

The following is a release from the Whitman Publishing Company:

With the U.S. Treasury getting ready to feature a woman on the new $10 bill, the subject of women on money is more relevant today than ever before. To celebrate this, Whitman Publishing announces the release of a beautifully illustrated new coffee-table book, 100 Greatest Women on Coins. Ron Guth, one of America’s most popular authorities on money, takes the reader on a personal guided tour of coins from ancient Greece to our modern-day pocket change.

“America’s currency is a way for our nation to make a statement about who we are and what we stand for,” Treasury Secretary Jacob J. Lew said on June 17, 2015. “The images of great American leaders and symbols they depict have long been a way for us to honor our past and express our values.” This has been true about images on coins worldwide for thousands of years.

The 100 Greatest Women on Coins include real women such as Cleopatra, Martha Washington, and Mother Teresa; goddesses such as Athena, Demeter, and Nike; allegorical women (who represent an idea or nationality) such as Miss Liberty, Mother Earth, and Britannia; and women in art, such as La Pietà and Auguste Renoir’s Girls at the Piano.

“100 Greatest Women on Coins is a celebration of the hundreds of women who have appeared on coins from ancient times to the present,” says author Ron Guth. “This is a book about mothers, daughters, sisters, wives, empresses, queens, ballerinas, athletes, goddesses, regents, allegorical figures, and the many forms in which women have appeared on coins. It’s the story of women who have made important contributions to history, politics, the arts, the sciences, and myriad other fields.”

The 100 Greatest were ranked and voted into place by members of Women in Numismatics, a national hobby organization of collectors, dealers, researchers, and historians. The coins on which the 100 Greatest Women appear include valuable gold and silver pieces, unusual commemoratives, and super-rarities, as well as more common pieces that you can find in your pocket change.

The book includes a foreword by Charmy Harker, president of Women in Numismatics and a noted coin dealer, who calls it “a fascinating look into the important role women have played throughout numismatic history and throughout history in general.”

“100 Greatest Women on Coins is not just a price guide or a fancy picture book,” says Whitman Publishing president Mary Burleson. “It’s a time machine that takes the reader to a hundred different points in world history. And it’s a fascinating and colorful introduction to the hobby of collecting coins.”

The book is coffee-table size, 128 pages, full color, with photographs and stories for every coin. It also includes market values and tips on building an impressive coin collection. Retail price is $29.95. 100 Greatest Women on Coins will be available in September 2015, online and at hobby shops and bookstores nationwide. It can be pre-ordered online, including at www.Whitman.com.