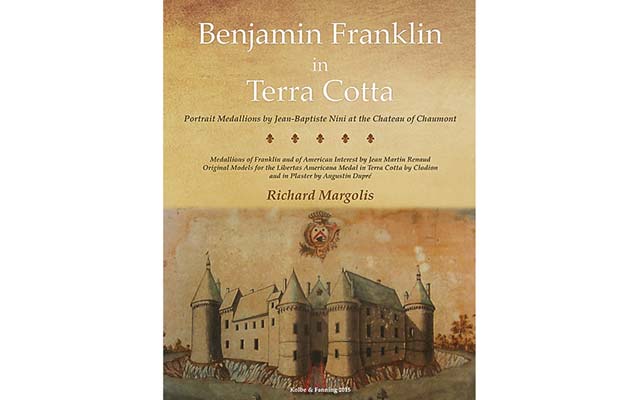 A new book focuses on a narrow topic of early American medallic artistry.

The book focuses on Nini’s 1777 to 1779 terra cotta portraits of Franklin and the moulds used to create them.

John Sallay, president of the Medal Collectors of America, said the catalog is “an incredibly thorough piece of scholarship,” and includes a detailed catalog of all of the known varieties of the plaques, which generally measure four to seven inches in diameter.

The plaques are often collected alongside early American medals.

Margolis has spent more than 40 years researching the topic, which is one reason Anne Bentley, Curator of Art at the Massachusetts Historical Society, said the volume is “essentially a catalogue raisonné of the artist’s most popular series of bas-relief portraits.”

Margolis extensively discusses the ways in which originals can be distinguished from aftercasts and educates the reader regarding the artistic, technical and iconographic context within which these pieces were created.

Extensive footnotes provide the reader with avenues to further information, without clogging the primary text with minutiae. With intent to be useful to both the novice as well as the expert, the author is careful to show his thought processes, making explicit his methodology and citing his sources throughout. The large-format volume is illustrated throughout in full color and features a signature-sewn binding in high-quality cloth and an enticing pictorial dust jacket.

Deluxe leather-bound editions of Benjamin Franklin in Terra Cotta are in production, but costs will not be known until they are produced, according to David Fanning.

The standard edition of the work, with a terra cotta color cover, retails for $195.

Shipping is $5 in the United States, with shipping to foreign addresses reflecting actual cost on an individual basis.

To order the book, email Fanning.