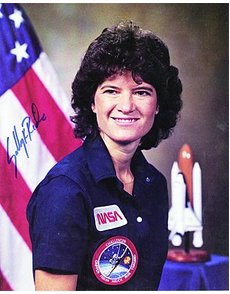 Sally K. Ride was the first American woman in space in 1983 when she flew aboard the space shuttle Challenger.

Several bills have been introduced in Congress recently seeking gold medals to be presented to a variety of Americans for their accomplishments.

Bills introduced in the House and Senate with identical wording seek a gold medal to be presented to professional golfer Jack Nicklaus in recognition of “his service to the nation in promoting excellence, good sportsmanship, and philanthropy.”

All of the profiled bills would also authorize production and sale of bronze duplicate medals.

A long list of findings in the legislation outlines Nicklaus’ accomplishments as a world-famous golfing professional. He has also been an advocate and fundraiser for a number of charities.

The bills have been sent to the House Financial Services Committee and the Senate Banking, Housing and Urban Affairs Committee, respectively.

H.R. 2387, introduced June 14 by Rep. Carolyn B. Maloney, D-N.Y., seeks a gold medal to be awarded to Rabbi Arthur Schneier in recognition of his pioneering role in promoting religious freedom and human rights throughout the world for close to half a century.

He was born in Vienna, Austria, in 1930 and lived under Nazi occupation in Budapest, Hungary, during World War II. He moved to the United States in 1947.

Schneier has been the spiritual leader of the Park East Synagogue in New York City since 1962. He is also the founder and president of Appeal of Conscience Foundation.

The legislation, co-sponsored by six other members of the New York House congressional delegation, was referred to the House Committee on Financial Services.

In 1983, Ride became the first American woman in space, flying aboard the space shuttle Challenger. She left NASA in 1987 to work at Stanford University’s Center for International Security and Arms Control.

Constance Baker Motley, an attorney who worked in the early days of the Civil Rights movement, would be posthumously awarded a gold medal with the passage of S. 1150, introduced June 12 by Sen. Richard Blumenthal, D-Conn.

She became a staff attorney at the National Association for the Advancement of Colored People Legal Defense and Educational Fund Inc. She was the only female attorney on the team that won the landmark case Brown v. Board of Education in 1954.

According to the legislation, Motley argued 10 major civil rights cases before the United States Supreme Court, winning all but one. In 1966 she was appointed by President Lyndon B. Johnson as a judge on the U.S. District Court for the Southern District of New York. Motley died Sept. 28, 2005. ¦