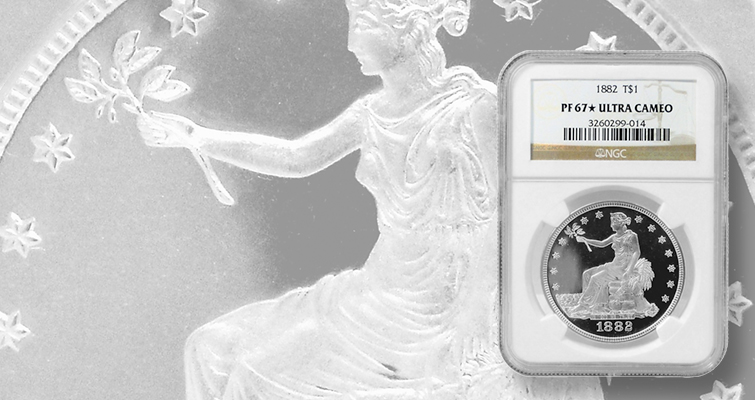 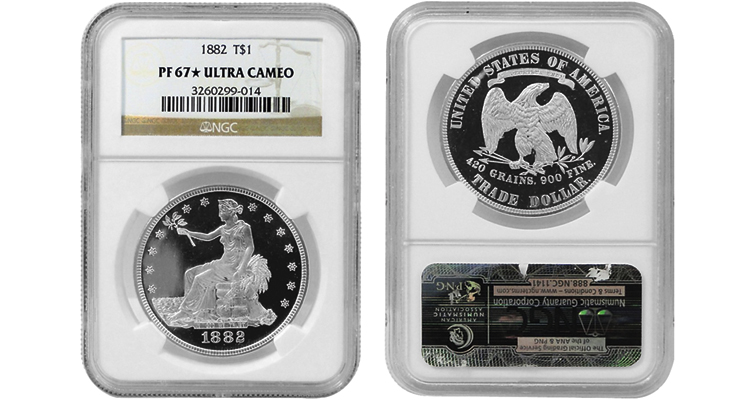 Only Proof Trade dollars were struck bearing the date 1882. The issue has a reported mintage of 1,097 coins.

A new auction record has been reported for a Proof 1882 Trade silver dollar.

The coin, graded Proof 67 ? Ultra Cameo by Numismatic Guaranty Corp., realized $50,400 in a Sept. 11 auction by Fox Valley Coin Auctions in conjunction with the Illinois Numismatic Association convention Sept. 11 and 12 in Tinley Park.

The price realized in the 770-lot auction includes the 20 percent buyer's fee added to the final closing hammer price of $42,000.

The 1882 Trade dollar was struck that year only in Proof; none were struck for circulation. The reported production of 1,097 coins was executed at the Philadelphia Mint.

According to Marlon Mathre, owner of Fox Valley Rare Coins Inc., 26 individual bidders competed for the 1882 Trade dollar in the firm's auction, which closed Sept. 11. The coin was offered without a reserve price. Mathre said via email Sept. 22 that the numismatic staff at Fox Valley believes the Proof 1882 dollar that sold Sept. 11 "is the finest known Trade dollar (At date of cataloging)."

Mathre added: "The coin was posted on line via Proxibid on June 26th. The opening bid was $1. It wasn't until July 23rd that it finally reached $1,000. On August 23rd it finally broke the $10,000 mark. At this time the consignor was concerned his great coin wasn't going to come through like he was hoping for. September 6th the bidding plateaued at a nice round number of $30,000. The worried consignor finally breathed a sigh of relief, 'he could tell his wife it was a good purchase after all.'

"The day before the auction [closed] the coin was at $31,500, but by the time the final hammer fell, there was a volley of bids that saw a final realized price of $50,400 (including buyer's premium)!

"As we always say, 'It doesn't matter where the bidding starts, it's where it ends up.'"