Never a sure thing 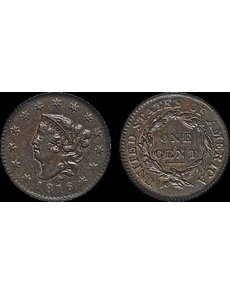 While no genuine large cents are dated 1815, cents were produced at the Philadelphia Mint in December 1815 using blanks shipped from England. The coins were likely dated 1816, like the Coronet cent illustrated above.

Coinage production has never been a sure thing. While most denominations are produced year in and year out, sometimes there are gaps.

The most famous gap is the 1815 hole in cent production. As every numismatic trivia player knows, no cents bear the date 1815 — the only date missing from a cent since U.S. coinage production began in 1793. Blame it on the War of 1812.

Before (and after) the War of 1812, the Mint bought cent planchets from Boulton & Watt of Birmingham, England. The wartime trade embargo stopped shipments, and the Mint pretty much lacked the wherewithal to make its own planchets.

In December 1814, the Mint coined all the remaining cent blanks and placed many of the resulting coins in the pay envelopes of its workers.

No cents were produced in 1815 dated 1815. However, with the end of the war, planchets once again sailed to America late in 1815. Soon after their December 1815 arrival, the blanks were struck into cents, but dated 1816.

While the Mint produced no 1815 cents a number of large cent collections have the date covered — with altered 1813 and even 1845 cents.

In 1930, by most accounts, the Philadelphia and San Francisco Mints struck the last of the problem-plagued Standing Liberty quarter dollars. Beloved by collectors, the coin bedeviled the Mint, with its raised date (1916 to 1924) and poorly struck head (most years).

In 1932, the Philadelphia, Denver and San Francisco Mints struck the first Washington quarter dollars in commemoration of the bicentennial of George Washington’s birth.

No quarter dollars were struck in 1933.

Ron Guth writes on PCGS CoinFacts.com, “The coin proved so popular that the design was continued as a regular-issue for circulation beginning in 1934.”

Millions of quarter dollars were struck in 1975, but not dated as such. The Mint, anticipating huge demand for coins celebrating the 200th anniversary of the United States, placed the dual date 1776-1976 on all quarter dollars, half dollars and dollars struck in both 1975 and 1976.

Coinage of the double-dated quarter dollars began April 23, 1975. The coins were released into circulation July 8, 1975.

Coins struck in 1975 are indistinguishable from quarter dollars struck the next year.