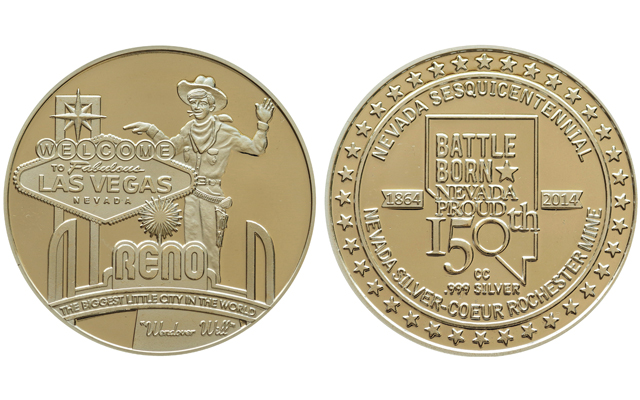 The third medal in a series of four marking the 150th anniversary of Nevada statehood is now available.

The third sesquicentennial medal was unveiled May 30 in a special striking ceremony with Nevada Gov. Brian Sandoval and Lt. Gov. Brian Krolicki.

Silver versions of the medal are being struck on an old Carson City Mint press. The silver for these medals was mined in Nevada. The blanks are provided by Northwest Territorial Mint in Dayton, Nev., not far from Carson City.

Ken Hopple, chief coiner at the Nevada State Museum, which houses Carson City Mint artifacts, strikes the 1-ounce .999 fine silver medals on the historic press No. 1, on display at the museum.

The copper medals are being struck at the Northwest Territorial Mint, which also prepared the dies for the medals.

The third design, selected by elementary age students throughout Nevada, features some of the state’s most iconic landmarks including the “Welcome to Fabulous Las Vegas” sign, the Reno Arch and Wendover Will. Wendover Will is a 63-foot sign at the state line with Utah.

More than 200 classes participated in the contest and almost 5,000 total votes were cast.

The other side (issuers don’t distinguish which is obverse and which is reverse) shows the 150th anniversary logo, which is composed of a map outline of the state with BATTLE BORN (a state nickname), NEVADA PROUD and 36 stars representing the state’s entry to the Union as the 36th state.

Mintage of the silver medal is expected to be 2,000, with no mintage limits are imposed on the copper medal.

Shipping and handling are additional charges; medals will be sent via insured FedEx delivery.

To order, phone the museum shop at 775-687-6835 or order online through the Nevada Legislature.

Sales of the commemorative medals help fund the Nevada 150 events and yearlong celebration. The first of four medals was launched last fall, with the second medal released in spring 2014. The final medal will be released later this year in September, closer to the actual anniversary date of Oct. 31.