Nearly $20 Million In Rare Coins And Currency Sold In 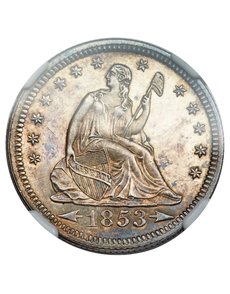 Rare early proof coinage was featured as over $9.3 million in rare coins sold in the September 6-9 Heritage US Coins Signature Auction. The US Coin auction was one of four Heritage auctions held as official auctioneers of the Long Beach Coin and Collectibles Expo over the week. Overall, the Heritage Long Beach auctions combined to sell over $19.7 million in rare coins and currency. All prices include Buyer's Premium.

As any serious collector of 19th century proof coinage knows, proof coins of any denomination and year before 1858 or so are quite rare. As such, it should not be surprising that the two top prizes to change hands during the floor sessions of this auction were both pre-1858 proofs. A Gem Cameo proof 1853 quarter with Arrows and Rays, formerly from the Eliasberg collection, brought $94,000. Perhaps five proof 1853 Arrows and Rays quarters are known, making this one year subtype the most important issue among proof seated quarters.

Even rarer is the 1854 proof eagle, a coin that was unconfirmed to exist until very recently, and which may very well be unique. This coin, whose provenance remains unknown and whose very existence was in doubt as recently as 2008, is an unmistakable proof despite a light amount of wear consistent with a grade of Proof-55. It sold for $88,125 at the Long Beach auction.

The Philip Clover of US Large Cents, a nearly complete collection of early US large cents by variety, altogether realized over $900,000, led by a 1795 Jefferson Head cent with Very Fine details that sold for $38,187. This collection contained over twenty die marriages that were so rare that Dr. William Sheldon, whose Penny Whimsy remains the standard reference book for early large cents, considered them uncollectable.

Heritage’s Long Beach World and Ancient Coins auction, held September 6-11, accounted for sales of nearly $7.9 million, highlighted by an 1820(B) gold Brazilian 4000 Reis which sold for $129,250 against a pre-auction estimate of $50,000-$75,000. This coin, struck at the Bahia mint without a mintmark, is so rare that every reference we could find listed it simply as "Rare" or "Extremely Rare". The fact that this is also a mint state coin — graded MS62 by NGC — only adds to the tremendous appeal caused by the coin's extreme rarity.

Rare Australian specimen notes dominated the results from the Heritage September 6-10 World Paper Money Signature Auctionin Long Beach. A series of one dollar, two dollar, five dollar and ten dollar specimens, each from 1972, each exceedingly rare, and offered individually, sold for $21,150 per note. Joining each of these 1972 issues at the $21,150 level was a specimen twenty dollar note from 1974. Overall, this auction raised over $1 million for its consignors.

Heritage is hard at work putting the finishing touches on their Dallas ANA offerings, which are scheduled for mid-October and include outstanding selections of both US coins and currency. These auctions will open for bidding very soon at HA.com/Coins and HA.com/Currency.