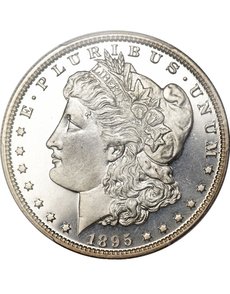 Rarities with strong eye appeal brought exceptional prices as a part of Heritage Auctions' 2012 November 29 - December 2 US Coin Signature Auction in Houston. Overall, this auction realized nearly $9.9 million for its consignors. All prices include a 17.5% Buyer's Premium.

The highest sale price in this auction came from a key date 1895 Morgan dollar, graded Proof 66 Cameo, which sold for $105,750. Only proof examples are known of this issue, with the circulation strike mintage of 12,000 believed to be melted in its entirety. Collectors wishing to own a complete set of this popular series must therefore acquire one of the skimpy mintage of 880 proofs. This beautiful coin shows strong cameo contrast and is one of the highest graded with this degree of contrast.

A Gem Haseltine restrike of the 1861 Confederate cent, at MS65 Red and Brown tied for the finest known, sold for $70,500 in Houston. Struck in 1874 after John W. Haseltine acquired the original Confederate dies, only 55 examples are believed to have been produced, and these coins appear at auction only infrequently.