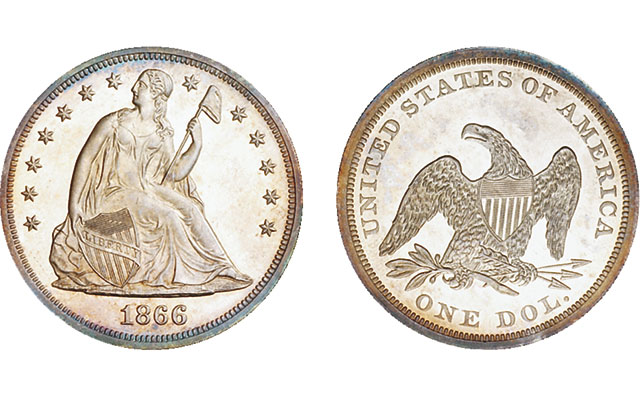 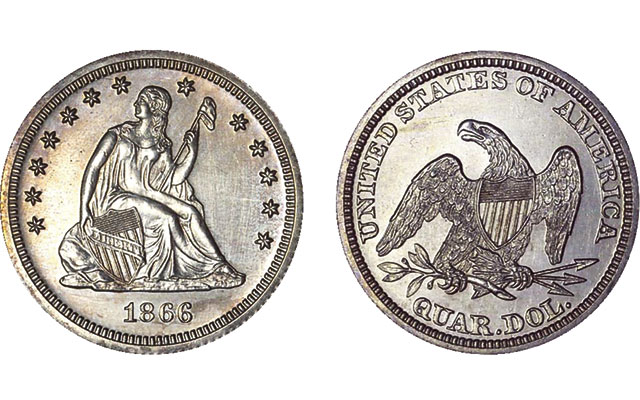 The du Pont’s unique Proof 1866 Seated Liberty, No Motto quarter dollar was recovered in late 1999 from an over-the-counter transaction at Los Angeles Coin Co. It had been missing since the 1967 robbery at the du Pont family home. 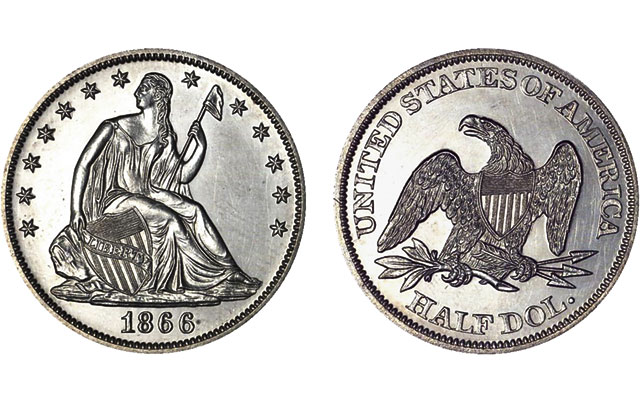 Superior Stamp & Coin of Beverly Hills, Calif., purchased what turned out to be the du Pont Proof 1866 Seated Liberty, No Motto half dollar, over the counter from an unidentified seller, sometime in September 1999.

The Proof 1866 Seated Liberty, No Motto quarter dollar, half dollar and dollar owned by business magnate Willis H. du Pont have been donated to the National Numismatic Collection of the Smithsonian Institution.

All three numismatic rarities had been on loan for more than a decade to the American Numismatic Association for display.

The Proof 1866 Seated Liberty, No Motto quarter dollar and half dollar surfaced in separate over-the-counter transactions in 1999 in Los Angeles. Both coins are unique, a fact that aided in their identification and subsequent return to the family

The Proof 1866 Seated Liberty, No Motto dollar surfaced in 2004. It is one of two pieces, but is distinguishable from the other example, which is in private hands.

The “No Motto” in the coins’ description is a reference to the motto IN GOD WE TRUST, which was added to the three denominations struck for circulation in 1866. The three No Motto denominations bear the older reverse designs.

Melinda Machado, director of the Office of Communications and Marketing for the National Museum of American History, confirmed the donation of the three coins.

“Our curators and exhibition team are discussing how best to showcase the coins to the public and I hope to have some more information to share with you on that in the next few weeks,” Machado said via email. “Since the 1960s, Mr. du Pont has been a generous donor to the NNC and the museum is grateful that Mr. du Pont has chosen the NNC as the permanent home for these coins.

“Other coins in the collection that are gifts from Mr. du Pont include an unprecedented collection of Russian coins which represent 300 years of Russian history under the Romanov Dynasty, revolutionizing the NNC holdings. Then, in the 1990s, Mr. du Pont contributed even more notable items, including a rare 1804 dollar.”

Feingold said museum staffers are examining various possibilities for numismatic exhibits featuring the three coins. Feingold said among the possibilities is an exhibit tracing the evolution of the motto IN GOD WE TRUST and how it has shaped U.S. coin history.

The No Motto pieces — thought by some to be transitional patterns, by others as numismatic fantasies — are believed to have been struck by the Philadelphia Mint at the behest of influential Philadelphia druggist and collector Robert Coulton Davis. Davis purportedly had assisted with the recovery of the 1804-dated dollars that “escaped” from the Mint in 1858.

Apparently, the Proof coins without the motto were created by muling a new 1866 obverse with a reverse die engraved for an earlier year’s production. All three, if created under those circumstances, would be considered fantasy pieces.

Up until 1967, Willis Harrington du Pont had possession of the Proof 1866 Seated Liberty, No Motto quarter dollar, half dollar and dollar.

That is, until a quintet of masked gunmen burst into du Pont’s Coconut Grove, Fla., home on Oct. 5, 1967, and made off with an unparalleled list of numismatic rarities, including the three Proof Seated Liberty, No Motto pieces, two 1804 Draped Bust silver dollars and a gold 1787 Brasher doubloon (these latter three coins have also been recovered).

More than 30 years passed with the whereabouts of the 1866 pieces unknown, until 1999, when the quarter dollar and half dollar both showed up at two coin shops in the same geographical area in California.

According to a spokesperson for the Los Angeles Coin Co., the 1866 quarter dollar was discovered as part of an over-the-counter purchase of a coin collection. The 1866 coin was returned to a representative of the du Pont family Dec. 10, 1999, according to the coin firm.

Paul Wojdak, firm president, said then that the piece was found among a grouping of “a lot of junk and old electrotype Colonial coins brought in by a customer.” Wojdak said the collection was purchased after the Proof Seated Liberty quarter dollar was spotted, but it wasn’t until further examination that it was determined the piece lacked the motto.

No sooner had word been spread that the du Pont quarter dollar had been recovered than the missing half dollar surfaced.

Superior Stamp & Coin of Beverly Hills, Calif., purchased the Proof 1866 Seated Liberty, No Motto half dollar over the counter from an unidentified seller sometime in September 1999, but apparently the counter person did not know the rarity of the piece.

Superior’s senior numismatist, Steve Deeds, later examined the piece. Through further research, it was learned the half dollar matched the description of the unique coin sold in 1961.

The Proof 1866 Seated Liberty, No Motto dollar surfaced in 2004 in Maine. The unnamed man who had the coin in his possession for nearly 20 years contacted American Numismatic Rarities LLC in February 2004 believing he might have the missing coin.

The man, a librarian, learned of the missing coin after reading a library copy of the Sept. 13, 2003, issue of Coin World announcing ANR’s sale of the only other Proof 1866 Seated Liberty, No Motto dollar known. The Coin World article also addressed the du Pont robbery.

The man met with numismatists John Kraljevich Jr. and John Pack, both then with ANR, on Feb. 26, 2004, during which time the numismatists identified the coin as the missing du Pont coin.