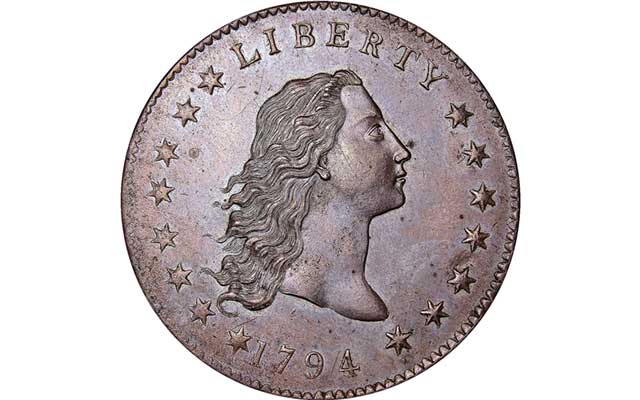 The Stack family has made many donations to the National Numismatic Collection over the decades, with maybe the most significant coin being the unique 1794 Flowing Hair dollar struck in copper. Image courtesy of Smithsonian Institution, Museum of American History. 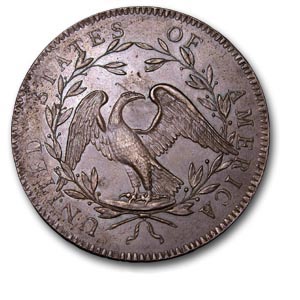 Reverse of the unique 1794 Flowing Hair dollar struck in copper, donated to the National Numismatic Collection by the Stack family. Image courtesy of Smithsonian Institution, Museum of American History.
Previous
Next

My first visit to the National Numismatic Collection at the Smithsonian Institution in Washington, D.C., was in the late 1940s when my father took me to see it. The curator at the time was Stuart Mosher, a dedicated and knowledgeable numismatist.

Though the coin collection was on public display, it was found in one of the lower floors then, somewhat below ground level, with windows on the upper parts of the walls. The coins were laid out in long black cases that were flat, poorly lit and hard to see, and some of the cases even needed dusting. It was housed in the “Castle,” the original national museum.

The National Numismatic Collection was started with a donation of 10,000 gold sovereigns by James Smithson, a wealthy Englishman, in the 1830s. He felt that our young nation should preserve its heritage for the future.

In 1950, Stack’s engaged two fabulous numismatists to be part of its staff, Dr. Vladimir and Mrs. Elvira Clain-Stefanelli, who stayed with us till 1955, when their skills were recognized and they were offered the job as curators for the National Numismatic Collection.

The National Numismatic Collection was shortly thereafter moved to a new building near the Castle that was dedicated to American History. From virtually the first day the collection was in the new building, the Clain-Stefanellis worked day and night to prepare new attractive displays that were well lit in a wonderful large gallery in the building. Whenever they were short a particular coin, they would call us, and if we had it in stock, we donated it. We wanted to be part of the new exhibit and collection.

Whenever the museum was offered some coins for acquisition, and because the museum had limited funds available for new purchases, we bought the coins and gave them to the collection.

During the following decades after moving into the new location, noteworthy special exhibits were created from the collection to attract more visitors.

Our donations continued. Sometimes Stack family members gave donations from their own collections, which we each had in storage at the company, or we helped the Clain-Stefanellis “borrow on loan” from collectors who had examples that were needed, so a particular exhibit would be as complete as it could get.

For the family’s dedication to the national collection, we were honored to be part of the John Smithson Society, the highest and most prestigious society connected with the museum. Shortly after this honor was bestowed on each of us, the names of Morton (my father), Joseph (my uncle), my two cousins Benjamin and Norman, and myself, Harvey, were placed on a large plaque at the entrance to the numismatic gallery. Other names like Lamont Dupont and well-known donors also appeared on the plaque.

The Stack family worked with the Smithsonian to get the acquisition of the famous Gold Coin Collection of United States, as well as ancient and foreign coins, which the Stack Family was the only firm to build for Josiah K. Lilly of the famous Eli Lilly family. That collection alone added some 6,150 coins to the museum’s holdings, and it quickly became one of the most important coin collections in the world.

Lawrence R. Stack, my son, who joined Stack’s in 1973, and I, following our forefathers’ and family’s desires, continued to donate and help with the exhibits as they became available.

In 1984, for the 200th anniversary of the American Banking System, we reviewed the various private collections we knew of and arranged the loan of some to enhance the Smithsonian’s banking exhibit. The exhibits attracted numerous visitors, and in fact we established a record at the opening of the banking exhibit — for the first time in the history of National Numismatic Collection, the secretary of the Treasury was present at an opening, and four former secretaries attended as well. It turned out to be a gala.

Another exhibit needed for the Bicentennial Celebration in 1976 was helped by my family and me. The U.S. Mint had through the years sent to the Smithsonian examples of coins and patterns to have and exhibit when the Smithsonian could, which the museum did on various occasions and for many decades. However,  the Mint, lacking many of its products, maintained that what they sent to the Smithsonian was only a loan. The Mint wanted the coins and patterns back to exhibit during the Bicentennial celebration at the brand new Philadelphia Mint. The Clain-Stefanellis were shocked and did not know what to do, especially since they had already planned to use many of the items for their part of the National Display at the Smithsonian, also during the Bicentennial.

Panic-stricken, they called me and asked how could we help them so the Smithsonian exhibit would not be depleted. I had an idea, proposed it to them, and they said, “Please try it. Anything that will keep the Mint’s coins here.”

As many know, Stack’ started to build the Louis E. Eliasberg Jr. Collection of Baltimore in 1941 and helped complete it in the 1950s. My family’s relationship with Louis Eliasberg was extremely close, and the work on the collection’s completion provided a great bond between us. Louis, during one of my many visits to Baltimore, told me in 1973 that he would like to try to sell his whole collection intact. Considering the total value, it would be a difficult job to find a single buyer who would keep the collection as he did, as not only did he enjoy owning it, he exhibited the coins on many an occasion — such as at bank openings and school educational exhibits, and he always made it available for specialists to study.

I approached him with the idea of possibly putting the entire collection on display at the U.S. Mint in Philadelphia in 1976, to give the Mint a world class exhibit to show its millions of visitors. Also, I said, this would give the collection greater exposure than it had yet had, and maybe after the exhibit was over, we or he could find someone who was enthusiastic enough to perpetuate the collection for generations to come. The idea went well with him, and in his southern style of speech, he said, “My boy, let’s do it.” And we did. This idea was one of the great helps we did for the National Collection, and it made the exhibit in Washington more attractive as well.

The Stack family has made many donations to the National Numismatic Collection, and at one point the Clain-Stefanellis, one night when we were having dinner together, said that the Stack family had donated to or acquired for the Smithsonian over 50,000 items that expanded and filled in gaps in their collection.

I feel that the 1794 Flowing Hair dollar struck in copper, and no doubt struck before the first silver dollar was struck, is surely a highlight — hard to match. The Quintuple Stellas, one struck in gold and another in copper, surely cannot be duplicated. And, of course, for historical and numismatic study and possibly future publication is the correspondence and drawings Charles E. Barber made from the period of 1880 to 1917 when he was a engraver of many coins and medals at the U.S. Mint.

Since the Museum of American History has undergone major renovations since the early 2000s and the numismatic exhibit was put in vaults or in very small display areas, the Stack family has been waiting for the reopening of the Numismatic Exhibit gallery. We are always available to assist the new curator to try once again to have the numismatic displays be a major highlight for all to have and learn from.