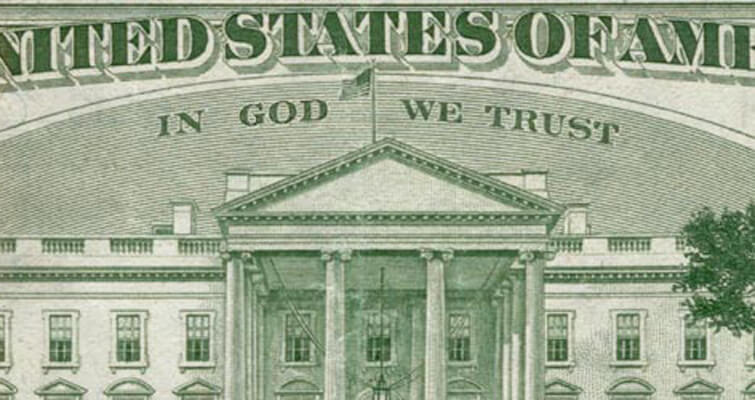 The official national motto, “In God We Trust,” has appeared on all the money made for U.S. commerce for nearly half a century and withstood legal challenges.

High school cheerleaders and valedictorians have come under fire recently when they’ve sought to invoke God’s name on their banners and in speeches. A simple, court-tested way to beat such attacks can be found on the money in their pockets.

The official national motto, “In God We Trust,” has appeared on all the money made for U.S. commerce for nearly half a century and withstood legal challenges.

Students at Kountze High School in east Texas have learned this lesson firsthand. The Kountze school board banned the display of faith-based messages at school events last fall, after football cheerleaders waved banners emblazoned with references to God and an atheist group filed a protest. But attorneys for the students sued to overturn the ban. On May 8, a Texas state judge ruled in their favor.

“Neither the Establishment Clause [of the U.S. Constitution] nor any other law prohibits the cheerleaders from using religious-themed banners at school sporting events,” Judge Steve Thomas concluded in his summary judgment ordering removal of the ban.

The atheist group that objected to the banners is no stranger to the nation’s coin collectors. The group, the Freedom From Religion Foundation, has also been unsuccessfully waging a legal fight to get “In God We Trust” stricken from U.S. coins and paper currency.

However, appeals courts have supported such traditional, patriotic and ceremonial phrases.

“In God We Trust” made national headlines in October 2011 when the House of Representatives passed a resolution reaffirming its status as the U.S. national motto. It did so after President Barack Obama mistakenly referred to “E Pluribus Unum” — words that have no official status — as the national motto.

The 2011 resolution also urged that the motto be prominently displayed in all public schools and government buildings.

The motto’s use on money was a direct outgrowth of religious fervor during the U.S. Civil War. A Baptist minister from Pennsylvania, Mark Watkinson, sent a letter to Salmon Chase, President Lincoln’s Treasury secretary, dated Nov. 13, 1861.

Chase wrote to Mint Director James Pollock, and from 1861 to 1864 the Mint struck pattern coins bearing three different mottoes: “God Our Trust,” “God and Our Country” and “In God We Trust.” The Treasury finally used “In God We Trust” on the 2-cent piece, a new denomination, in 1864.

Use of the motto wasn’t required by Congress in legislation authorizing the 2-cent piece. The law simply gave the Treasury authority regarding inscriptions on the nation’s minor coins. The authority was extended to gold and silver coins on March 3, 1865 — and the motto was specifically mentioned in that legislation.

In 1908, a law was passed requiring the words’ appearance on U.S. coins, though the cent, 5-cent coin and dime were exempted.

The 1908 law resulted from an impulsive decision by President Theodore Roosevelt. In 1907, Roosevelt ordered the Mint to omit the words from new gold coinage. Roosevelt believed the use of God’s name on coinage was blasphemous. But Congress mandated use of the motto after church groups detected the omission.

Matthew H. Rothert Sr., an Arkansas numismatist, noticed in 1953 that the coins on a church collection plate bore the motto but paper money did not. Rothert contacted Treasury Secretary George W. Humphrey and started a successful letter-writing campaign to get the motto placed on our currency.

Public Law 140, requiring the motto on all U.S. coins and paper money, was introduced in the 84th Congress and signed into law by President Dwight Eisenhower on July 11, 1955. On July 30, 1956, Eisenhower signed another bill establishing “In God We Trust” as the national motto. By 1966, it had been added to all our paper money.

The poem’s penultimate sentence contains this reference to God: “Then conquer we must, when our cause is just, And this be our motto: ‘In God is our trust.’ ”

Who would rule that the words “In God is our trust” from our patriotic national anthem — which is played before most school events — can’t be used on banners displayed at those events?

What institution could hope to succeed in censoring cheerleaders and valedictorians when they seek to give voice to the trust our nation places in God, when precedents dealing with our money and our national anthem confirm that certain official expressions are perfectly legal? Coin enthusiasts nationwide have a long tradition of sharing the students’ values.

Mike Fuljenz is president of Universal Coin & Bullion in Beaumont, Texas, and immediate past president of the Diocese of Beaumont Catholic School Board.