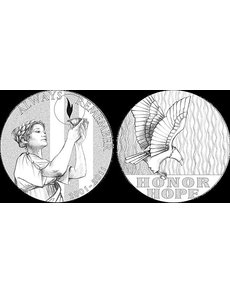 Collectors will be able to begin placing orders for the National September 11th Memorial and Museum silver medals June 20.

The approved obverse and reverse designs for the Proof 1-ounce .999 fine silver medal will be unveiled in formal ceremonies near Ground Zero in New York City the same day.

The United States Mint and Treasury Department are to be represented at the ceremonies by U.S. Treasurer Rosa “Rosie” Gumataotao Rios. Sales begin at noon Eastern Time.

Two million medals are to be struck, combined, at the Philadelphia Mint and the West Point Mint, with examples bearing the P Mint mark and the W Mint mark, respectively.

The sale of each medal will include a $10 surcharge that is authorized to be paid to the National September 11 Memorial & Museum, a private not-for-profit organization overseeing the design and funding of the memorial and museum at the World Trade Center site.

Because the two Mint production facilities are not expected to begin full-scale production of the medals until the middle of July at the earliest, shipping will not begin until sometime in September, according to Tom Jurkowsky, director of the U.S. Mint’s Office of Public Affairs.

Jurkowsky said preliminary trial strikes with the P Mint mark were produced at the Philadelphia Mint on May 4.

Final trial strikes were to be produced at both facilities during the week of June 13, Jurkowsky said, with full-scale production expected four to six weeks later.

The authorizing legislation, Public Law 111-221, provides for the maximum 2 million medals to be struck at no more than two U.S. Mint production facilities, preferably at the West Point Mint and the Philadelphia Mint.

“To the extent possible,” according to the enabling act, the total production should be evenly divided between the two production facilities.

Jurkowsky said the division of the production between the two Mints could be skewed depending on how orders are placed. Collectors will be able to place orders for medals from one or both facilities, and there will be no household ordering limit, Jurkowsky said.

The medals are being produced in commemoration of the 10th anniversary of the Sept. 11, 2001, terrorist attacks on the United States, which killed thousands in New York City, Virginia and Pennsylvania, and the establishment of the National September 11 Memorial & Museum at the site of the destroyed World Trade Center.

The obverse and reverse designs for the medal were approved by Treasury Secretary Timothy F. Geithner.

The medal’s obverse design features Lady Liberty holding the Lamp of Remembrance. Behind her are beacons of light stretching skyward.

According to the Mint, “Lady Liberty, the lamp and the light symbolize not only the immeasurable loss on that fateful day, but also the resiliency and triumph of those who persevered.”

Weaver’s obverse design was recommended for the medal on Feb. 17 by the Commission of Fine Arts and on March 1 by the Citizens Coinage Advisory Committee.

Weaver served on the U.S. Mint’s engraving staff as a sculptor-engraver from 2000 until her retirement on Jan. 13, 2006, after five and a half years of service. Weaver became an AIP associate designer in February 2007, and was elevated to master designer in 2009.

The medal’s reverse design was also by Weaver, and was sculptured by Joseph F. Menna, a U.S. Mint medallic sculptor.

The reverse depicts an eagle against a backdrop of cascading water. The eagle symbolizes the strength of the survivors of the Sept. 11 attacks, the families and the nation. The flowing water is emblematic of peace, serenity, healing and the continuity of life. The reverse is inscribed honor / hope.

The medal will carry the initials of Weaver (dw), Hemphill (ph) and Menna (jfm).

While the adopted reverse design was the one recommended by the CCAC, the CFA recommended one of Weaver’s other reverse design submissions. The unadopted design shows the same main eagle design, with a different inscription – no day shall erase / you from the / memory of/ time.

According to Jurkowsky, the medals will be struck on the same 1-ounce .999 fine silver 40.6-millimeter (1.598-inch) planchets that the U.S. Mint is supplied for production of American Eagle silver bullion coins. The thickness will be slightly less at 0.110 inch due to the different artwork, Jurkowsky said. Mint officials had not explained the differences in thickness by press time June 10.

While silver American Eagles are produced with a reeded edge and inscribed with the weight in silver, the medals will exhibit a plain edge and bear no designation as to composition, Jurkowsky said.

The medals will be struck on Gräbener GMP presses at both the West Point and Philadelphia facilities.

Public Law 11-221 states, “The medals struck under this Act shall be made available for sale in the quality comparable to proof coins.”

The blanks and dies are to be specially prepared to impart the Proof finish. The die production is being executed at the Philadelphia Mint.

The respective P or W Mint mark will appear on the medal’s reverse.

Orders placed during the introductory pricing period will include a complimentary 8-inch by 10-inch document, suitable for framing, showcasing the artwork for the medal’s designs, descriptions of the designs and the facsimile signature of the acting director of the United States Mint, Richard Peterson. The complimentary document will be shipped separately, but at the same time as the medals.

The U.S. Mint may also offer the medals at bulk “at a reasonable discount,” according to Public Law 111-221.

None of the medals may be struck after Dec. 31, 2012, but they could still be sold after that date should inventory remain.

Jurkowsky said the Mint plans to end sales, if inventory remains, in late December 2012 so that surcharges may be paid to the beneficiary organization in a timely manner.

The funds will support the museum’s operations and maintenance once it is completed. To learn more about the National September 11 Memorial & Museum, visit www.911memorial.org/.

The legislation that became the National September 11 Memorial & Museum Commemorative Medal Act of 2010 was introduced by two New York Democrats — U.S. Sen. Charles E. Schumer and U.S. Rep. Jerrold Nadler. It was approved by the House and Senate, and signed into law Aug. 6, 2010, by President Obama. ¦

An earlier version of this article incorrectly stated that sales of the medal began June 30.