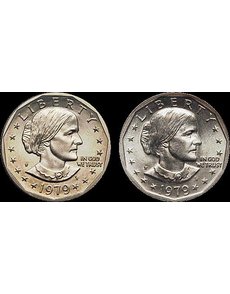 During production, the rim on the 1979-P Anthony dollar was enlarged to make it more distinguishable from the quarter dollars, resulting in the Narrow Rim, left, and Wide Rim, right, versions.

Two major factors create resistance to the adoption of a dollar coin.

The first is what economists refer to as network externalities. The more people who switch to the new dollar coin, the more valuable and useful it becomes. Initially, since few people use the coin, vending machines, cash registers and coin counters don’t accommodate it, which makes it less desirable.

The second factor is psychological; people prefer a dollar bill and are habituated to its use.

Once widespread use of a new coin is achieved, it has no real barriers in commerce. Unfortunately for the Anthony dollar, its size and appearance created a psychological hurdle too high to overcome.

When the Anthony dollar went into production on Dec. 13, 1978, Mint officials appeared confident that it would be a success. They began striking the coin seven months before its July 2, 1979, release, stockpiling 500 million coins to deter hoarding and ensure that enough coins would be available to meet demand.

Believing that the Eisenhower dollar failed because it was too large to be practical, officials reduced the dimensions of the new dollar. The dollar’s new size, though, meant that it was only 2.1 millimeters larger in diameter and 0.25 millimeter thicker than the quarter dollar.

To differentiate the coins, according to a Mint press release: “... the new dollar, while still round, will have an eleven sided inner border on both sides of the coin which allows the coin to be distinguished by touch as well as sight.”

This border was critically important to the adoption of the dollar, to create a firm psychological divide between the dollar and quarter dollar. During production in 1979, it was determined that this boarder needed to be more pronounced, and modifications were made to the hub to enlarge it. The 1979-P Anthony dollar therefore exists in two versions — Narrow Rim and Wide Rim.

To distinguish between the two versions, it’s easiest to look at the date position. If the date is spaced from the rim design, the coin is a Narrow Rim, and if the date and rim are close, it is a Wide Rim.

Beginning in 1980, all Anthony dollars at all Mints were struck with the Wide Rim only.

Regardless, few were ready to accept that a coin so close in size and appearance to the quarter dollar should circulate in lieu of the dollar bill.

After producing the coin for just two years, the Mint in 1981 struck dollars for inclusion in Mint and Proof sets only. Then the dollar coin was abandoned entirely for 18 years.