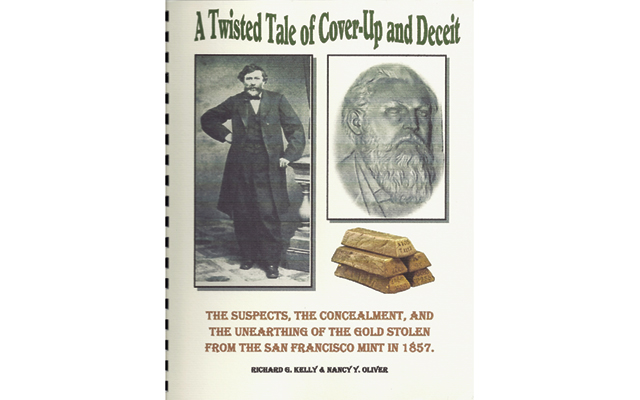 This book tells what happened to gold stolen from the first San Francisco Mint in the mid-1850s.

Many people love a good mystery, and numismatic literature is rich with “whodunits” and “what­happenedtoits.”

Some numismatic mysteries have been solved by inspired detective work. Q. David Bowers and Robert Sagers unraveled the enigma of the letters “G.G.G.” counterstamped on some 19th century large cents. As detailed in Bowers’ article “Two Coins in One: Large Cents with Interesting Counterstamps” for the 10th American Numismatic Society Coinage of the Americas Conference, G.G.G. stood for “Goodwin’s Grand Grease Juice,” a hair tonic.

Now, Richard Kelly and Nancy Oliver have cracked one of numismatics’ most notorious crimes, the great gold heist from the first San Francisco Mint facility.

During the 10 months beginning October 1856, $150,550 in gold disappeared, amounting to multiples of the San Francisco Mint’s 1857 annual payroll. A theft of this magnitude could only have been perpetrated by someone in a position of trust: a Mint officer.

The San Francisco Mint leadership appeared squeaky-clean: Superintendent Charles Hempstead, Chief Coiner John M. Eckfeldt, and Melter and Refiner Agoston Haraszthy (ah-gush-ton harris-tee) all had sterling reputations. Eckfeldt in particular seemed above suspicion because he was from the Mint’s first family (Eckfeldts had worked continuously for the U.S. Mint since George Washington was president).

The gold had vanished from Haraszthy’s department, so he became the chief suspect. This polymath (a Hungarian politician, he founded Sauk City, Wis., captained a steamship, was appointed San Diego County’s first sheriff, and served in California’s state Senate), stoutly maintained his innocence.

The government prosecuted him vigorously for nearly four years. On Feb. 26, 1861, the presiding judge instructed the jury, “There is no evidence in existence to prove the slightest fraud in the defendant.” The jury deliberated only five minutes before finding Haraszthy “not guilty.”

No one else was ever charged with the Mint crime, and the fate of the gold remained a mystery until Kelly and Oliver broke the story in the Aug. 8, 2011, Coin World.

They found, as they excavated the basement floor, a wooden box filled with small gold ingots and granules. Four movers eventually divided about $143,000, almost 95 percent of the amount stolen from the Mint, from this hoard.

Further research revealed that the house’s previous owner, John Eckfeldt, had purchased it in 1871, and committed suicide there three years later. After 150 years, the mystery appears to be solved!

A Twisted Tale of Cover-Up and Deceit is available from Kelly and Oliver at noliver146@sbcglobal.net  for $23.