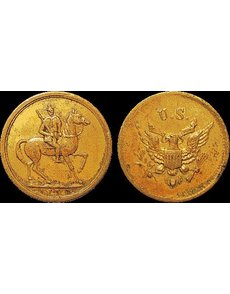 A brass token featuring a horseman obverse has a very similar reverse, right, to a cataloged battleship token, each featuring a heraldic eagle.

I found this token. I checked the Fuld and Hard Times Tokens books for “War Between the States” tokens, but no luck.

The horseman on the obverse looks to me more like Spanish-American War vintage. The reverse has an eagle with “U.S.” above. It is brass, measures 18.8 millimeters in diameter and weighs 3.60 grams.

I’ve posted this on Coin Community (coincommunity.com) but no identification yet. One Canadian fellow suggested that I Google “In Pursuit of Pancho Villa 1916-1917,” but nothing came up. Hope you or one of the readers can identify it.

However, there may be a partial clue to its identity in another book — Military Tokens of the United States, 1866-1969 by the late James J. Curto.

While Military Tokens of the United States does not contain an exact listing for Finkle’s token, the reverse of his piece has an intriguing similarity to one that is listed, and would fall into a time frame close to the Pancho Villa era.

In a chapter on Naval tokens, Curto lists a piece he classifies as N35, or Naval 35, which features on its obverse the USS Virginia, a United States battleship in service from 1906 to 1920.

On the reverse of that token is a heraldic eagle similar to that seen on the obverse of the United States seal: wings outspread, a shield covering its breast, an olive branch in its right talon, arrows in its left, and a banner held in its beak with the legend E PLURIBUS UNUM. Like Mr. Finkle’s token, the Virginia token’s reverse has “U.S.” above the eagle.

Too, the composition and size of the Virginia token are almost identical to the piece in question, with Curto listing it as brass with a diameter of 19 millimeters.

Curto catalogs a second, identical token, listed as N36, but composed of copper instead of brass.

Based on the close similarities, it is possible that the manufacturer of the Virginia token, albeit unknown, was also the minter of Finkle’s horseman piece.

An example of the Virginia token sold in a March 11, 2011, Holabird-Kagin Americana auction for $140 plus a 15 percent buyer’s fee.

Anyone who can provide additional information on Finkle’s mystery piece is welcome to contact “Readers Ask.”