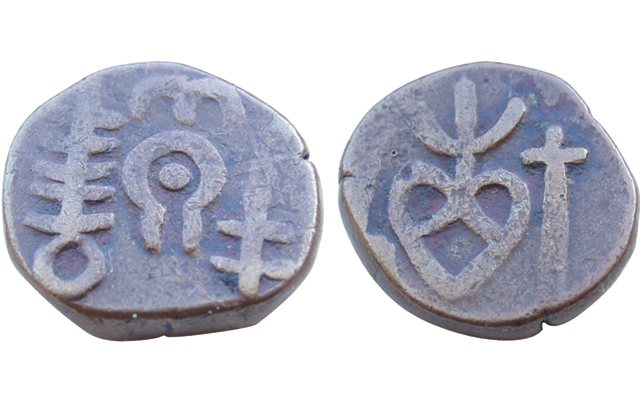 A “mystery coin” that has vexed a reader for eight years exhibits symbols commonly seen on coins of India, but according to one expert, is likely a modern fabrication.

I have been trying to identify this “mystery coin” and its enigmatic symbols for eight years.

One side has four symbols, the other has only two. The symbols are raised but I can’t tell if they are upside down or not.

What is this coin, and what do the symbols mean?

Images provided by the reader are of a piece unfamiliar to Coin World staff, so we contacted the principal of Stephen Album Rare Coins.

Album immediately identified the central symbols on the coin, suggesting they are well known on the coins of Indore, a city in the modern Indian state of Madhya Pradesh.

However, Album said the ancillary symbols are “weird.” The fabric somewhat resembles some coins of Rewah (a princely state in Madhya Pradesh), but “doesn’t look quite correct,” Album said. “My suspicion is that this is a modern made-for-collector or tourist piece, probably no older than the 1990s. But I am not 100 percent certain.”

Album is a respected specialist in Islamic and Indian coinage, so this item’s true origin may never be known.

Though Album did not address the possibility, the piece may have been used as a counter or weight.

This Polish coin came to me in an estate. It appears to show Nicolaus Copernicus, but I cannot tell what metal it is and what its value might be. Can you please help?

Thankfully, the reader’s 1967 Polish 10-zloty coin is readily identifiable from photographs she provided.

Unfortunately for the reader, the coin exhibits some type of damage at the reverse rim.

According to the 2013 Standard Catalog of World Coins by Chester Krause and Clifford Mishler, 40th edition, edited by George Cuhaj and with values by Tom Michael, the coin would be worth $3 in Extremely Fine condition.

As it is, it might likely be located in a “bargain bin” for less than $1.