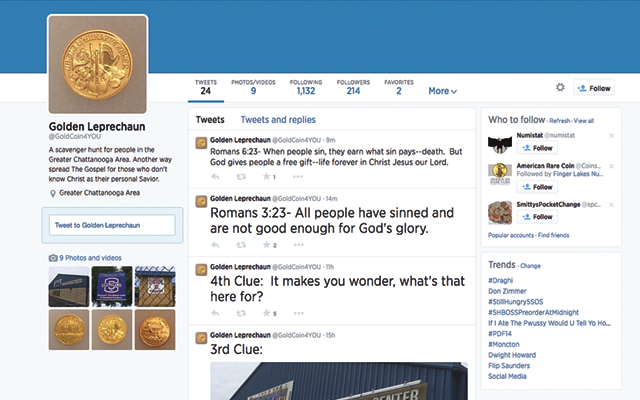 Mysterious Twitter users leaving wads of cash around San Francisco and Chicago for clued-in followers to find have been the subject of many news stories lately, and now another anonymous donor has started dishing out gold coins to the masses.

The masses of the Chattanooga, Tenn., area, at least.

WTVC, the local ABC affiliate in Chattanooga, talked to two sisters who found a gold coin left by the so-called Golden Leprechaun, a Twitter user who has left numerous gold coins around the area and provides clues in tweets.

The coin that WTVC reported on was found at an Outback Steakhouse.

The Golden Leprechaun does not explicitly identify the coins in tweets, but has said they are 99.99 percent gold. If the pictures of coins tweeted are indeed credible, among the coins that are, or will be, up for grabs are a 2012 American Eagle gold bullion coin and a 2011 Austrian Philharmonic gold 10-euro coin.

The account, which tweeted for the first time on May 30, also includes religious messages.

The Golden Leprechaun tweeted Wednesday night that there were still “20 Gold Coins left in the Leprechaun’s Pot of Gold” and that “the rainbow leads to fun and gold.”

UPDATE: As of 9:15 a.m. ET Monday morning, the Golden Leprechaun Twitter handle, @GoldCoin4U, appears to have been deactivated.