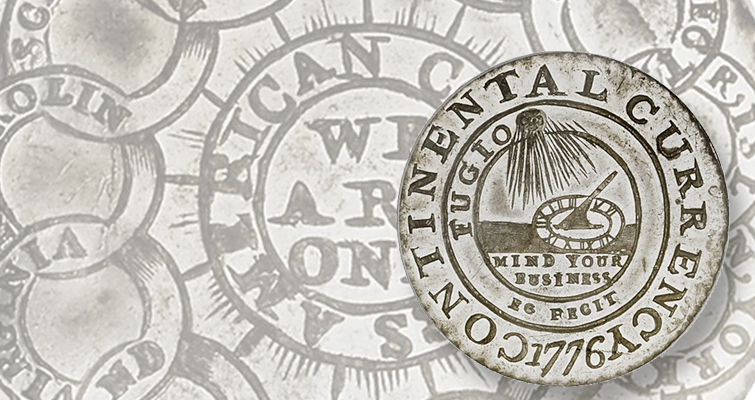 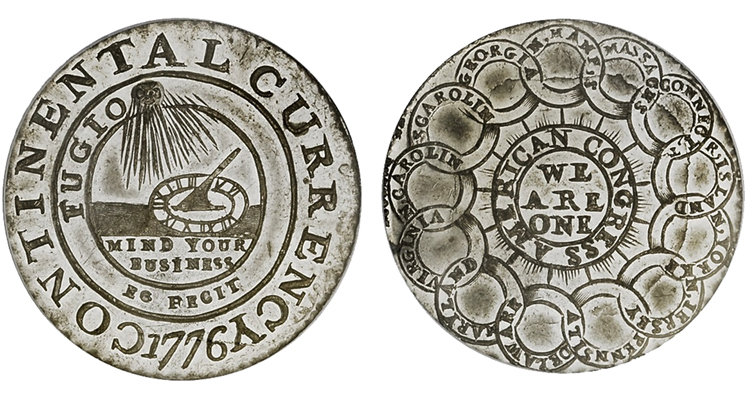 This 1776 Continental Currency dollar in pewter will be offered by Spink USA during its June 19 and 20 auction.

Despite decades of research into historical records, no authorization for the coins has ever been found. Inscriptions suggest that the Continental Congress approved their production and they are linked in design to the Continental Currency notes, which were authorized and issued into circulation.

No one is completely sure that they were denominated as dollars since the coins bear no denominational markings. Some speculate whether they were intended as cents. Versions are known in pewter, brass, and silver, struck from  pairings of five obverse dies and four reverse dies.

The obverse and reverse designs are linked not only to the contemporary Continental Currency notes, but also to the later 1787 Fugio cents. The general designs are largely attributed to polyglot Benjamin Franklin, who was deeply involved in the production of early American paper money printing and design.

The central device of what is generally identified as the obverse bears a sun dial underneath the rays of the sun, with the Latin word FUGIO (“it flies,” as in “time flies”) to the upper letter and MIND YOUR BUSINESS below. Two crudely cut circles surround the main devices, with the sundial inside the inner circle and FUGIO and the sun  positioned between the circles.

The date 1776 appears at the 6 o’clock position with CONTINENTAL CURRENCY encircling (the latter inscription is spelled correctly on the subject coin, though some pieces bear the misspellings CURENCY and CURRENCEY).

Positioned above the date between the two circles is the engraver’s “signature”: EG FECIT. The engraver has been identified as Elisha Gallaudet, the engraver of the plates for the Feb. 17, 1776, Continental Currency notes. “Fecit” is Latin for “made it,” the whole meaning “Elisha Gallaudet made it.”

The reverse bears a 13-linked chain, with the name of one of the 13 rebelling states on each link in the chain. At the center is WE ARE ONE, attesting to the links between the 13 states, with AMERICAN CONGRESS positioned on either side of the center motto.

As the cataloger for Spink writes: “The Continental Currency pieces are mysterious, controversial, and historically important. Mysterious, because little documentation has been found concerning their origin and use. Controversy has always surrounded them. Collectors, dealers, and historians have asked ‘Are they coins or patterns?’ ‘Who made them and under what circumstances?’ ‘What are they really made of?’ ‘Are they Dollars or Cents?’ ‘What do the symbols and mottos really mean, and who designed them?’ ”

The cataloger adds that Spink would argue that the rare silver pieces are patterns, that the brass pieces are pattern pennies, and the pewter pieces are coins. Professional Coin Grading Service and Numismatic Guaranty Corp. “population reports indicate that a fairly large proportion of the reported [pewter] examples in the census are circulated. This seems to indicate they were used as actual coins, in exchange for goods and services.”

A cataloger for a silver Continental dollar sold by Heritage Auctions in May 2014 notes: “The mintage figures are unknown, but the pewter coins appear with enough frequency to suggest they were produced in substantial numbers. Many of the coins were undoubtedly melted during this period, because Benjamin Franklin observed that pewter was sorely needed for the canteens used by soldiers in the Continental Army. The most reasonable explanation for the brass examples is that they represent dies trials. The silver coins are of full weight and value, suggesting that a precious-metal coinage was contemplated, but the Continental Congress was chronically short of funds and had no reliable supply of silver, so this idea must have been abandoned quickly.”

The chief researchers in the series have been Eric P. Newman, still active at the age of 106, plus Don Taxay, Walter Breen, Philip Mossman, and Michael Hodder, all of whom “spent many years researching the Continental Currency coinage, mesmerized by its mysterious origins,” noted Heritage in its lot description in the 2014 auction.

Newman’s 1952 monograph 1776 Continental Currency Coinage and Varieties of the Fugio Cent is considered the major work on the topic and both Continental Currency dollars and Fugio cents are cataloged by the varieties listed in the reference. The piece in the Spink auction is cataloged as Newman 3-D, struck from a specific die pairing of the third obverse die and fourth reverse die.

The same 3-D die marriage was used to strike at least two versions in silver.

One was offered by Heritage Auctions in May 2014 in the fourth sale from the Eric P. Newman Collection. That silver example, graded Mint State 63 by Numismatic Gua­ranty Corp., realized $1,410,000 in that auction.

Spink’s auction is scheduled for June 19 and 20 in its New York City office. 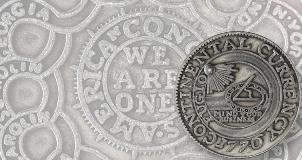 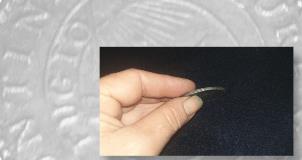 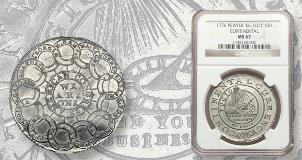