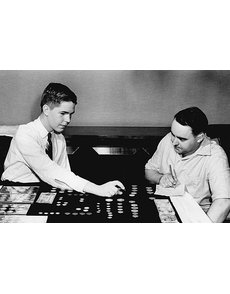 The author being interviewed by a newspaper reporter in the summer of 1955, just before going to the ANA convention. The Omaha, Neb., show was his first ANA convention, and it took special effort for him to acquire a bourse table.

As I make plans for the World’s Fair of Money Show — the American Numismatic Association convention in Rosemont, Ill., in August — my thoughts turn to my first such show in the summer of 1955.

By that time, at age 17, I had been to a half dozen shows in the East and had set up a bourse table in several. I was imbued with youthful enthusiasm, and each coin-collecting event was a pleasure — with new things to see and do.

As I was not yet of legal age, I was not eligible to become a member of the ANA. So, I asked my father to join, which he did. Now, I could read the monthly magazine, The Numismatist.

At the time, ANA officials believed that youngsters could not be trusted. Reasons included that they were not old enough to make contracts, lacked mature judgment, and, my gosh, they might return a coin a month or two later and demand a refund.

Thousands of eager young people in the hobby were shut out.

In April 1955, The Numismatist printed this:

“Some additional bourse space is available for the annual convention of the ANA in Omaha, Neb., Aug. 24-27, 1955. Bourse space will be limited to not more than 40 so that adequate facilities, light, and aisle space will be available. All bourse space is in one room, around the wall in the room containing the membership exhibits, and fully air conditioned. Cost is $50, which includes full registration, badge and one banquet ticket. Reservation with remittance should be sent to General Secretary Lewis M. Reagan, Box 577, Wichita, Kans. The Association reserves the right to decline any reservation, and those received after available space has been reserved will have to be declined.”

I wrote to Reagan and asked if I could have a table. The secretary carried his office in his briefcase, figuratively, and took care of nearly all association business, including printing contracts, membership and convention details.

Reagan wrote back stating that I could have a space if my father guaranteed my business there and if I could have another letter of recommendation.

My dad did this, and Lee F. Hewitt, editor of Numismatic Scrapbook Magazine, sent a warm comment that he had found me to be very reliable and with a good amount of numismatic knowledge.

All was set, and soon I would be headed further west than I had ever been — a long way from my hometown of Forty Fort, Pa., where I was a high school student in the junior class.