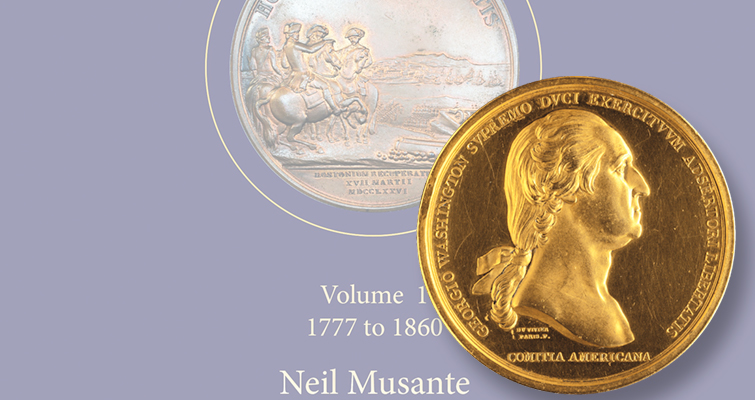 Researcher and author Neil Musante has exhaustively studied medallic art associated with the father of our country, George Washington. 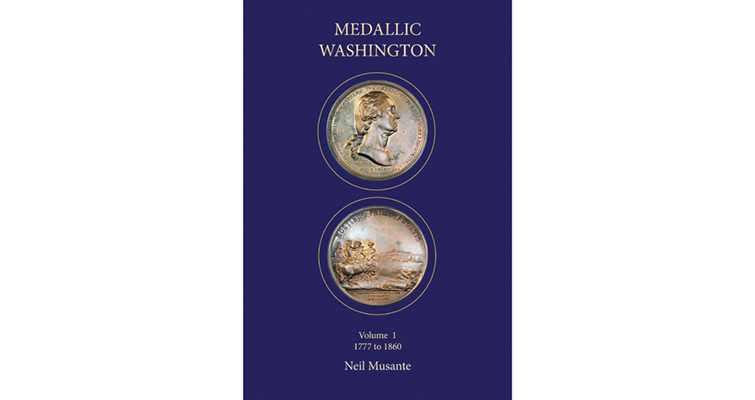 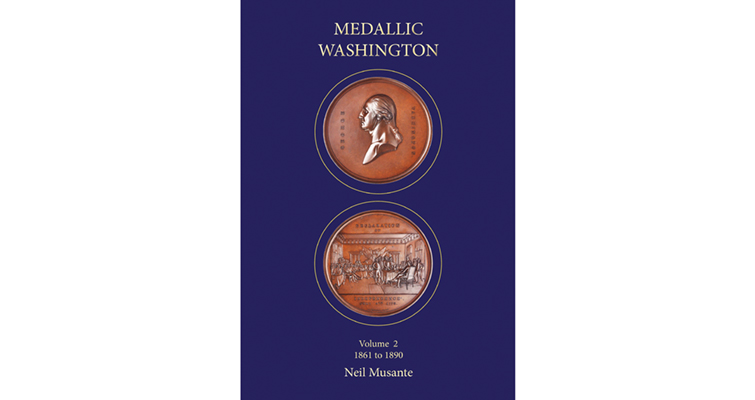 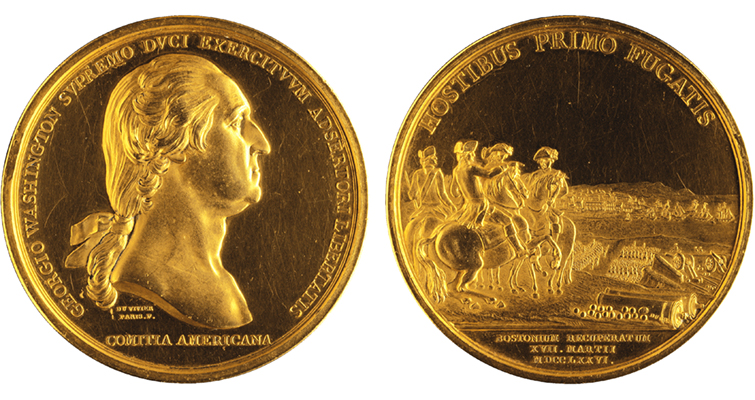 The unique gold Washington Before Boston medal, presented in New York on March 21, 1790, to George Washington by Thomas Jefferson, is in the collection of the Boston Public Library.

Images used with permission from the Trustees of the Boston Public Library/Rare Books. 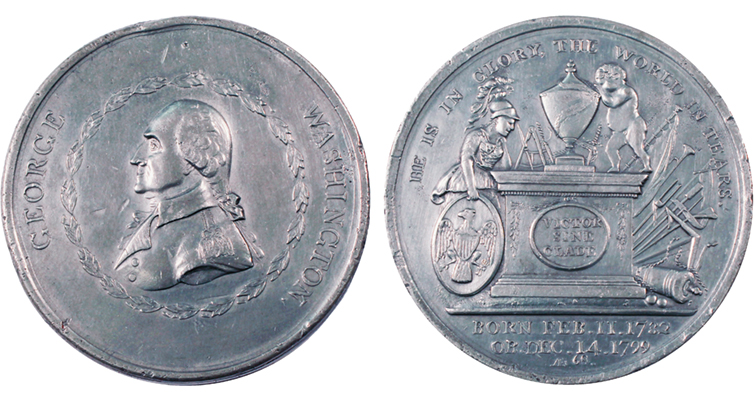 From Volume 1 of Medallic Washington, a Victor Sine Clade medal issued for Washington’s Funeral, GW-76, white metal, 56.2 millimeters, circa 1800, finest known example. It was designed by Dudley A. Tyng and the dies were engraved by Nicholas Pearce. The medal was issued by Jacob Perkins.

Images by Neil Musante, courtesy of the Massachusetts Historical Society from the collection of William Sumner Appleton. 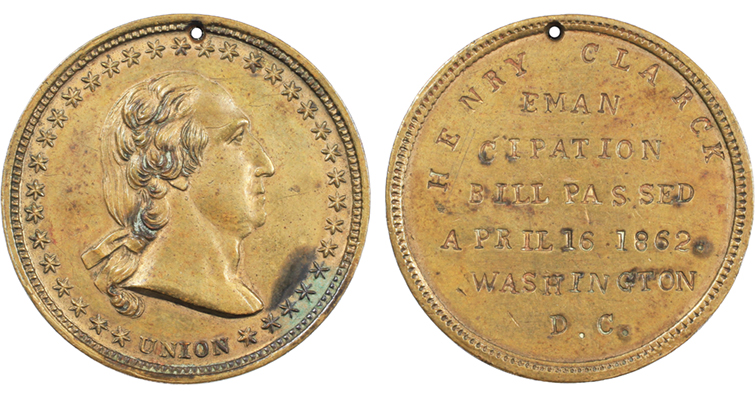 Civil War dog tag adapted to commemorate the emancipation of slaves in Washington, D.C., on April 12, 1862, GW-566, in brass, 31 millimeters. The medalet was issued five months prior to Abraham Lincoln’s Emancipation Proclamation, when the House of Representatives, acting within their purview as sole administrator for the district, passed this legislation. Emancipated slaves marked the day by visiting sutlers then encamped in the district and having these medals made.

Images by Neil Musante, courtesy of the Pennsylvania Historical Society, from the collection of William Spohn Baker.

The following is as much an appreciation as a review, introducing a dramatic new addition to American medallic literature.

I learned long ago that indepen­dent book reviews are of the great­est value to enquiring readers, though few independent reviews ever appear.

Books have been the bone and sinew of American numismatics since coin and medal collecting first began in the United States.

Pioneering books on coins, medals and tokens began appearing somewhat erratically in the mid-19th century on a hit or miss basis. Dealers published some premium lists disguised as books, and a very few dedicated specialists published their own studies for the few interested collectors.

The most serious efforts were those created by the few learned societies then existing, notably the New York-based American Numismatic Society. Then Augustus G. Heaton’s Treatise on the Mints of the United States appeared as a private publication in 1893 and permanently turned most American collectors exclusively toward U.S. coins by date and Mint mark.

A note on vocabulary: “Washingtonia” is a tall palmate-leafed palm tree seen in southern California and Florida; “Washingtoniana” are objects relating to the life and career of the Father of Our Country. A trivial point that aids clarity.

In pre-Civil War United States, interest in medals had already developed, particularly in medals of George Washington. The first deluxe book on the subject was James Ross Snowden’s A Description of the Medals of Washington; of National and Miscellaneous Medals, published by the U.S. Mint in 1861.

Mint Director Snowden created an exceptionally handsome large format reference based on the Mint’s own medal collection. A treat to the eye, the book actually presented many sketchy or inaccurate descriptions.

Generally imprecise engraving made do for illustrations and much basic information it might have been expected to provide was absent.

I was able to examine a nearly pristine copy of Snowden in the library of Stack’s in the firm’s Midtown New York City office in 1995 while preparing my article for the American Numismatic Society’s Coinage of the Americas Conference. I could see that while possession of the Snowden book conferred glorious bragging rights for its owner, it actually offered little truly useful information to the researcher.

Before dissolution of the Stack’s library in 2012, I also glimpsed a mournful sight — an original printing of William Spohn Baker’s 1885 Medallic Portraits of Washington, housed in a stout manila envelope to keep its sea of disintegrating paper in one place.

In active use was the 1965 Krause Publications hardcover Baker reprint-update on glossy stock with revisions and illustrations by the late Dr. George Fuld.

Baker divided Washingtoniana into topics or categories from Colonial coins through spielmarken. He numbered each entry continuously without leaving space for future additions. “Baker” numbers were thus riveted onto the field, first in Fuld’s 1965 effort and then in the far more ambitious “Centennial Edition” of 1985 and the final 1999 volume prepared by Fuld and the late Russell Rulau.

As their listings expanded, it was harder and harder to preserve Baker’s numbers, which now became confused and virtually incoherent. The reader had to memorize the newer editions’ layout to be able to find any desired item as numbers were not continuous.

My independent review of the 1985 Baker was joined by my examination of another strange opus by one Francis Pessolano-Filos offered by Eros Press, that offered an oddly assorted and colorfully misdescribed run of Washington medals. Little used, this effort contained and therefore perpetuated numerous factual errors and bizarre attributions. It sank from sight except for copies lurking on a few library shelves.

In 1999, what was really a third edition of Baker appeared from Krause though still styled “2nd Edition.” It had been promised that this new volume would contain many additions and corrections made available by this reviewer and other interested researchers, but the new hardcover book was rushed to press to coincide with a promised auction of the Dr. Irving N. Schuster Collection, which never took place.

Neither Rulau nor Fuld were enthusiastic at the prospect of extensive change, and in fact none appeared. Baker had now achieved the status of “holy writ,” making “tampering” with traditional wording perilous.

Both Fuld and Rulau have since died. Rulau had received all rights and materials relating to Baker from Krause’s later owners before his death. Never comfortable with computerization, Rulau had kept the Baker pages and source materials in hard copy including typed and handwritten file cards in his home office.

As we will see, the final Rulau-Fuld edition will remain a necessity for collectors interested in post-1890 Washingtoniana, omitted from the 2016 Musante volumes.

Musante and the 21st century

Massachusetts researcher Neil Musante’s challenge must be called daunting, as it certainly was to predecessors that may have considered revising Baker.

Fortunately, he was not easily deterred and had the stamina to see the task to completion within the parameters he had established.

It was not Musante’s intent to simply “revise Baker,” copying or extending his format or listings. Those had been bare-bones and without illustrations in 1883, and were still limited in Fuld’s 1965 work.

Presentation of all needed basic information in Musante’s introduction is wonderfully concise, rational and consistent.

Photography is superb through­out both volumes. Published measurements include 21st century metric diameters and weights and their equivalents in units Washington would have understood.

One great annoyance has been cleansed thanks to Musante’s hands-on familiarity with the many small-diameter Washington medals created for the booming medal trade of the 1850s. These include George Hampden Lovett of New York, Joseph Merriam of Boston and John Adams Bolen of Massachusetts.

Particularly refreshing is his detailed listing of Lovett’s pesky 10-medal sets of Washington’s Headquarters medals with varying obverses that were presented with particular incoherence in the later editions of Baker.

The decision to simply eliminate listings of post-1890 medals was courageous though it may draw resentment from “completists,” though more than one veteran Washington collector suggested this step in recent years.

Let’s hope that some dedicated researcher will now come forward to extend the “Musante treatment” to medals of 1891 to 2000.

“Catalog values” do not appear in the text of Medallic Washington. All Krause editions of Baker included valuations. Those in 1965 were gathered into three columns per page in an addendum; later editions presented dropped-in values with most listings.

Many of these estimates were controversial, others went years without change and their actual usefulness could be and were vigorously disputed.

It has been announced that a printed price guide will soon be completed and sent to purchasers of the two-volume set.

Medallic Washington is offered at $165 plus $10 for shipping. Money matters always invite argument, but it should be noted that book publishing today is vastly more costly than unthinking critics may realize.

My own American Art Medals 1909-1995 was ticketed at $155 by ANS, a figure constantly heckled by one major figure in the writing community. If the critics had a son or daughter in college in 2016 they would find themselves paying a similar price for a paperback science textbook without a second thought! How much more glorious is a deep-blue hard cover two-volume set with glossy stock and color photography throughout!

Simply stated, if there was a Nobel Prize for the most glorious book of 2016, Musante’s Medallic Washington would be a prime contender! 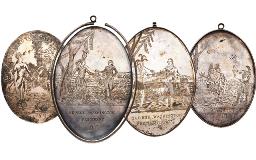