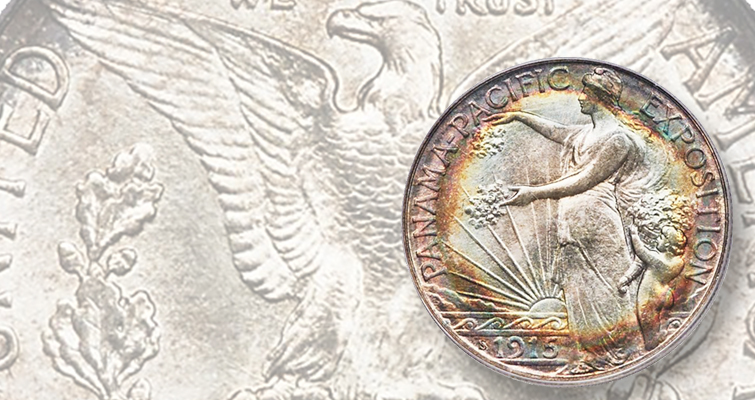 A beautifully toned 1915-S Panama-Pacific International Exposition half dollar graded Mint State 67 with a green Certified Acceptance Corp. sticker sold for $29,375, multiples of what a typical MS-67 might sell for. 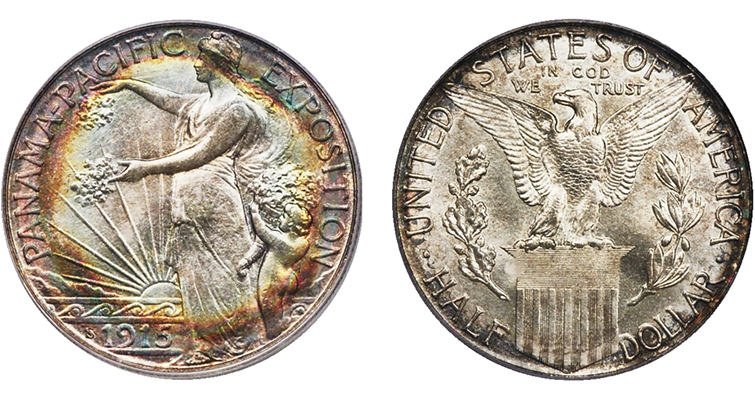 A closer look at both sides of the toned 1915-S Panama-Pacific International Exposition half dollar that sold for $29,375 at Heritage's FUN auctions.

Among the five denominations and six coins issued for the 1915 Panama-Pacific International Exposition — the two gold $50 pieces, a gold $2.50 quarter eagle, a gold dollar, and a silver half dollar — the latter is the most common, with a mintage of 27,134 coins. Examples were sold at the fair for $1, making them a relatively affordable souvenir. Still, as with the gold $50 pieces, many more were struck than actually sold. Of the 60,000 half dollars produced, more than half were melted.

Examples often showcase beautiful rainbow toning that highlights Charles Barber’s pretty obverse and George Morgan’s handsome reverse design. On this one Heritage writes, “At the periphery, a band of salmon-pink coloration is bordered by thin, successive rings of sea-green, lavender, and russet toning that flow into a variegated pool of ice-blue and platinum hues in the center. The reverse is an even silver-gray tone.” 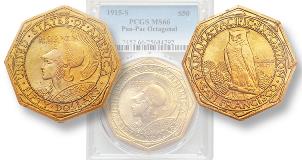