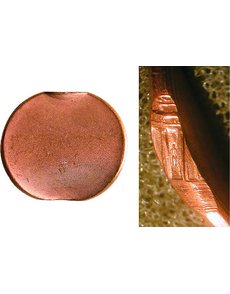 This undated Lincoln copper-plated zinc cent displays a typical edge strike. The center of the Lincoln Memorial, right photo, can be seen at the pole located at the bottom of the photo seen at the left. 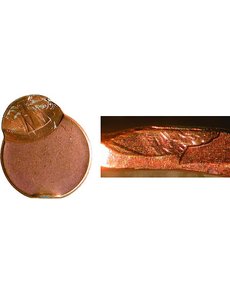 A single downstroke was probably responsible for both the edge strike and the off-center strike located at opposite poles on this 1996 Lincoln cent. The obverse-struck edge shows the front of Lincoln’s throat. 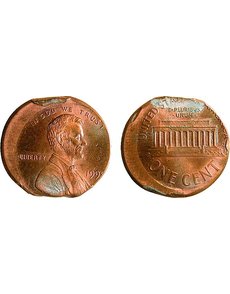 A complex sequence of bending and slippage during a single downstroke would account for the edge strike, paraxial foldover strike, and minor off-center strike on this 1998 Lincoln cent. The embedded foldover flap can be seen at the top of the photo to the right.

Among the myriad striking errors known to hobbyists, the edge strike ranks among the rarest. An edge strike is exactly what the name implies — a coin struck on-edge.

An undated Lincoln copper-plated zinc cent illustrated this week provides a typical example. Die-struck design elements can be found at opposing, flattened poles. The planchet itself is strongly bowed.

Given the rarity of simple edge strikes, we would expect double- and triple-struck examples to be nearly unobtainable. Surprisingly, they seem just as abundant as the conventional type. Factoring out secure examples such as normal coins that are secondarily struck on-edge, we still have an uncomfortably large number of claimants. I think part of the answer is that many of these purported multi-struck edge strikes are the product of a single downstroke (a double strike, by definition, requires two downstrokes).

These dubious double strikes fall into two categories. The first category is illustrated this week by a 1996 Lincoln cent. It features an edge strike at the pole struck by the obverse die and an off-center strike that encompasses the opposite pole. Such coins are often interpreted as conventional edge strikes that receive a second off-center strike that overlaps (and erases) one of the edge-struck poles. The characteristic antipodal positioning of the two strikes suggests a simpler explanation. It’s more likely that the planchet received an edge strike in the early phase of the downstroke, slipped, fell on its side and was struck again as the hammer die completed its downstroke.

The second category of dubious double strike is represented here by a 1998 Lincoln cent. It features an edge strike at the obverse-struck pole, a highly asymmetrical (“paraxial”) foldover strike at the reverse-struck pole, and a slightly off-center strike between them. The foldover flap is embedded in the reverse face. I’ve seen more than a half-dozen similar examples.

Coins like the 1998 cent are usually described and encapsulated as double strikes and one time as a triple strike (see Collectors’ Clearinghouse, Dec. 28, 2009). Once again, however, their highly consistent appearance suggests that a single downstroke was responsible.

The simplest explanation involves the following sequence of events. The planchet is first struck on-edge during the initial phase of the hammer die’s downstroke. As the hammer die continues its descent, the planchet begins to bend in the middle (an “axial bend”). As the pressure rises the planchet slips and falls on its side, with the axial bend facing upward toward the hammer die. While all this is happening, a second bend is developing at the pole in contact with the anvil die. This pole — temporarily caught in the recesses of the anvil die — develops a paraxial fold. It’s not clear whether the metal adjacent to the point of contact is stretched out or distinctly folded. For the larger flaps, it’s probably the latter. Regardless of the mechanism, it’s enough to create a small, semicircular flap that is tucked beneath the bent planchet.

The final step entails the hammer die completing its descent, creating the central strike. This flattens the axial bend and embeds the small flap into the reverse face. Stress cracks running at a right angle to the axis connecting the edge strike and the foldover flap can usually be seen in the copper plating. This marks the location of the axial bend.