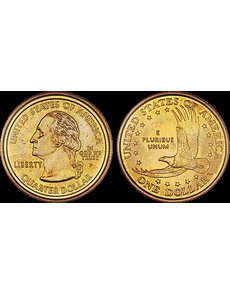 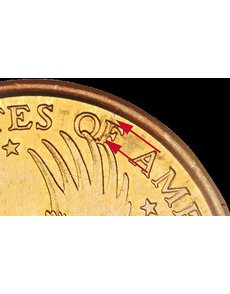 Mule in Auction from page 1The reverse from Die Pair 1 exhibits a die crack in the F in OF in UNITED STATES OF AMERICA that is absent from the reverses from Die Pairs 2 and 3.

An example certified Mint State 65 by Professional Coin Grading Service is being offered Jan. 10 in Orlando, Fla., by Heritage Auctions as part of its Platinum Night.

The auction will be held in conjunction with the Florida United Numismatists convention.

The piece does not appear to be part of the census compiled by researchers within the numismatic community.

The mules were struck in 2000, but the coins bear no date (the date for 2000 quarter dollars was applied by their reverse dies, and for the dollar coins, by their obverse dies). The mule obverses bear, in the field to the right of Washington’s bust, the Philadelphia Mint’s P Mint mark.

Three different die pairs have been identified by specialists for the double-denomination mule. The example being offered Jan. 10 is from Die Pair 1.

Neither PCGS nor Numismatic Guaranty Corp., which combined have certified all of the publicly known examples, maintains a separate registry for error coins.

The Heritage cataloger speculates in the auction lot description that the error example being offered Jan. 10 could possibly be the “Fred Weinberg” specimen or the “Tommy Bolack 1” example.

Tommy Bolack, a New Mexico collector who owns eight of the now 14 known examples, said Dec. 10 the piece being offered by Heritage Auctions is not his. He said he has no plans to sell any of the eight that he owns. In fact, he’d like to increase that number.

Bolack said he plans to bid on the PCGS MS-65 Die Pair 1 piece in January and hopes not to be shut out from adding to his collection, like he was on Aug. 9. Bolack said he missed a telephone call from Stack’s Bowers Galleries that would have enabled him to participate in the live bidding for the NGC MS-67 Die Pair 1 piece auctioned by that firm.

Stack’s Bowers sold the NGC MS-67 Die Pair 1 piece for $155,250, the highest price paid at auction for one of the mule errors and more than double the highest price Bolack has had to pay for any of his eight pieces.

Coin World has also determined that the piece being offered in January by Heritage auctions is not any of the examples handled by Weinberg, a specialist in error coins. The first 11 coins in the census are posted online at www.fredweinberg.com.

Heritage, when informed that the coin in the FUN auction appears to be a new specimen, indicated it would update its lot description for the coin.

Ron Guth, president of PCGSCoinFacts.com, said Dec. 10 that the PCGS MS-65 piece, from Die Pair 1, being offered in January by Heritage was certified sometime in 2005, based on the certification number on the grading insert.

The Wallis coin was initially certified and encapsulated by NGC as grading MS-66, but a month later, was crossed over into a Professional Coin Grading Service slab, also as grading MS-66.

The discovery coin was sold by Auctions by Bowers and Merena at the 2000 American Numismatic Association Philadelphia Millennium Sale for $29,900.

Ten years later, in July 2011, Nicholas P. Brown from Majestic Rarities in Chicago reported his acquisition of a specimen now thought to be the 11th known. The piece is certified by NGC as being from Die Pair 1.

Although Brown indicated his acquisition was a known example, it did not match any of the previous 10 pieces in the census posted online by Weinberg.

When Stack’s Bowers offered an NGC-graded, Die Pair 1 piece Aug. 9, 2012, Coin World was able to learn, through NGC researching its coin submission records, that the coin was yet another example not then part of the known census.

Coin World’s research determined that the example offered Aug. 9 was one of two coins submitted to NGC for certification in March 2005. Both pieces were certified MS-67 by NGC. NGC’s submissions records did not indicate from what die pair each coin was struck, but the piece sold Aug. 9 was cataloged as a Die Pair 1.

The whereabouts of the second example from that 2005 two-coin submission, representing the 13th example, is not publicly known.

The MS-65 coin to be offered by Heritage in January 2013 appears to be the 14th example identified.

A federal investigation that was concluded more than a year after Wallis reported discovery of the first example of the mule error resulted in the prosecution of two Philadelphia Mint production employees for selling examples into the secondary market.

Investigators were able to locate hundreds of thousands of the mule errors at an armored carrier service in Philadelphia contracted by the Federal Reserve before the errors could enter circulation.

? Die Pair 3: For Die Pair 3, the obverse has been described as “fresh and frosty.” The obverse of the Die Pair 3 coins shows just a hint of the radial lines found on the discovery example. A small die gouge appears in front of Washington’s lips. The reverse appears perfect and exhibits no die cracks.

In addition to the genuine mules, collectors should be aware that altered coins/replicas resembling the mules are also in the market.

The pieces are made by several novelty companies and produced by machining out the obverse of a genuine Sacagawea dollar, and then inserting and gluing into place a machined-down State quarter dollar with its Washington obverse facing out.

To identify the replica, look for a seam where the field meets the rim. The altered piece’s weight will be off from the 8.1 grams of a genuine Sacagawea dollar, and the altered piece will produce a thud instead of a distinct ring when tapped, a result of its method of assemblage.

The undated double-denominated Sacagawea dollar/Washington quarter dollar mule error type is ranked No. 1 in the 2010 reference 100 Greatest U.S. Error Coins by Brown, Weinberg and David Camire. Camire is president of Numismatic Conservation Services, and an attributer and grader of error coins for NGC.

The mule error type is ranked No. 2 in 100 Greatest U.S. Modern Coins by Scott Schechter and Jeff Garrett. ¦