Mule in August auction not part of census 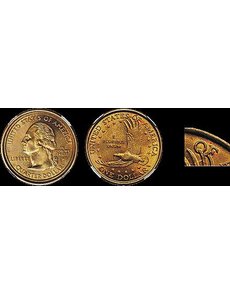 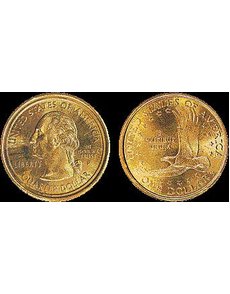 The Frank Wallis discovery specimen, Die Pair 1, was initially certified MS-66 by NGC, then crossed over into a PCGS MS-66 holder. The coin is one of eight in the collection of New Mexico collector Tommy Bolack.

An example of the Sacagawea dollar/Washington quarter dollar mule error coin crossing the auction block in August is one of two examples that are not among the census of 11 examples previously reported.

Stack’s Bowers Galleries is scheduled to offer the piece, graded Mint State 67 by Numismatic Guaranty Corp., as part of its Aug. 9 Rarities Night session held in conjunction with the American Numismatic Association World’s Fair of Money in Philadelphia.

The appearance of the coin in the sale is the first time in more than a decade that one of the mules is being offered at public auction.

A mule is a type of error coin struck from dies not intended to be paired with one another.

The undated double-denominated Sacagawea dollar/Washington quarter dollar mule error coin shows the George Washington portrait used on the obverse of State quarter dollars paired with the Soaring Eagle reverse of the dollar. The coin is struck on a manganese-brass clad dollar planchet. The mule errors were struck in 2000 at the Philadelphia Mint on a coinage press dedicated to dollar coin production.

The mules appear without date or the P Mint mark since both details are part of the regular Sacagawea dollar obverse design.

What makes the production of these mule errors more unusual is that a State quarter dollar obverse die was paired with a Sacagawea dollar reverse die not once, but three distinct times as determined by die characteristics.

The Stack’s Bowers offering, attributed as being struck at the Philadelphia Mint from Die Pair 1, exhibits the characteristic die crack from the rim through the F in OF on the Sacagawea dollar reverse. Three die pairs are identified for the 11 examples publicly identified for the error type.

Kris Briggs, marketing manager for Spectrum Group International Inc., parent company to Stack’s Bowers Galleries, told Coin World June 27 that the consignor, who wishes to remain anonymous, indicates to Stack’s Bowers that the coin consigned for sale Aug. 9 is not a new discovery.

Briggs told Coin World the auction company did not know the consigned coin’s prior grading history, but provided Coin World with the NGC certification number.

Scott Heller, NGC’s director of operations, said June 28 that NGC’s submission records indicate that the coin bearing the certification number for the coin Stack’s Bowers is offering was one of a two-coin consignment submitted in March 2005 for authentication and grading.

Both of the coins were examples of the mule error, Heller said. Heller said both submissions were graded MS-67 by NGC.

No attribution was made on either coin as to what die pair either represents, Heller said.
David Camire, president of Numismatic Conservation Services, and an attributer and grader of error coins for NGC, said June 28 that the grading service does not keep a census for its error coins.

Neither of the two coins from the March 2005 submission is among the 11 examples listed in information found via the “Error News” link on Fred Weinberg’s website at www.fredweinberg.com.

Camire said it is his belief that more than 11 examples of the mule are extant, with additional pieces owned by individuals who do not want to publicize their existence.

The error type, from Die Pair 1, was first discovered in May 2000 in Mountain Home, Ark., by Frank Wallis in an Uncirculated 25-coin roll of Sacagawea dollars from First National Bank & Trust. The Wallis coin was initially certified and encapsulated by NGC as MS-66, but a month later, was crossed over into a Professional Coin Grading Service encapsulation, also as MS-66.

The discovery coin was eventually sold by Auctions by Bowers and Merena at the 2000 ANA Philadelphia Millennium Sale for $29,900.

Bolack has acquired eight of the 11 known mules through auction or private transaction.

Error coin experts indicate some of the mule examples may be valued in six figures.

When contacted by Coin World June 27, Bolack said he still owns and possesses the eight mules he had acquired and does not plan to sell any.

Bolack said he plans to bid on the example being offered by Stack’s Bowers Aug. 9.

Collector Greg Senske from Cape Girardeau, Mo., still owns the NGC MS-67, Die Pair 3 mule he discovered in September 2000 in change from a cashier at his company’s cafeteria. The coin had been in a 25-coin roll of Uncirculated Sacagawea dollars.

The last coin listed in Weinberg’s census of the 11 examples of the mule, the formerly newest reported, is an NGC MS-67, Die Pair 1 coin.

Nicholas P. Brown, owner of Majestic Rarities in Chicago, told Coin World June 27, 2012, that he still has that NGC-encapsulated coin physically in his possession, and that it’s not for sale. He said he plans to display the coin at the ANA World’s Fair of Money in August in Philadelphia.

Brown confirmed to Coin World July 12, 2011, his purchase of the NGC MS-67 coin from its owner, who wishes to remain anonymous. Brown would not disclose the purchase price.

Brown had the coin submitted by its seller directly to NGC for authentication, grading and encapsulation, before being forwarded to him.

The only coin that is unaccounted for among the 11 pieces previously identified is a PCGS MS-65, Die Pair 1 example sold by Weinberg to error coin dealer Arnold Margolis, who placed the coin in September 2000 with an unidentified buyer for an undisclosed sum. Coin World has been unable to determine the location of this coin, but it is not the mule in the Stack’s Bowers auction.

Camire said June 28 that he previously examined the Margolis piece in its PCGS holder and it is definitely not one of the two mules from the March 2005 submission.

Production of the mules led to an intensive investigation by Treasury and Mint authorities. The investigation led authorities to a Federal Reserve-contracted coin terminal and wrapping facility located near the Philadelphia Mint, and authorities advised officials there to be on the lookout for any of the mule errors. An undisclosed number of mules were found at the facility.

While a government investigation found that the errors were produced by mistake and not deliberately, two former Philadelphia Mint coin press operators were prosecuted on charges of selling, but not stealing, up to five of the mules and converting the profits to their own use.

U.S. Mint officials in the summer of 2002 indicated the possibility they might seek forfeiture of some of the double-denomination errors depending on when they were discovered and whether they may have left the Philadelphia Mint illegally, but to this date officials have not pursued civil forfeiture proceedings.

Reports that the mule production was in the hundreds of thousands of coins are unconfirmed.
Hobby experts by the fall of 2000 had determined that multiple die pairs had produced the known errors, which might suggest large numbers of the errors were struck. Government investigators were slow to accept the findings of numismatists that multiple die pairs were used in making the coins; investigators did not accept the findings of numismatists until September 2001.

??Die Pair 1: The reverse for Die Pair 1 exhibits a die crack in the F in OF in UNITED STATES OF AMERICA that is absent from the reverses from Die Pairs 2 and 3. The obverse exhibits numerous radial striations attributable to stresses involved during striking, resulting from the slight differences in size between the two dies. The discovery coin is from Die Pair 1.

For more information about the NGC MS-67, Die Pair 1 mule to be offered Aug. 9 by Stack’s Bowers, contact Stack’s Bowers Galleries on the West Coast at 800-458-4646, and on the East Coast toll free at 800-566-2580. Email the firm at info@stacksbowers.com or visit the company’s website at www.stacksbowers.com. ¦