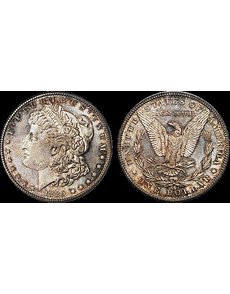 The MS-68 1889-CC Morgan dollar from the famed Eliasberg Collection sold for $881,250 as part of Stack’s Bowers American Numismatic Association auction, substantially more than it brought on its last trip to the auction podium, in 2009.

While lacking a million-dollar rarity, the official American Numismatic Association World’s Fair of Money auctions by Stack’s Bowers Galleries had dozens of stunners.

On Aug. 15, the company sold the key 1889-CC Morgan dollar, graded Mint State 68 by Professional Coin Grading Service, for $881,250. Stack’s Bowers was certainly confident in the coin’s ability to dazzle, writing at the start of the lot description, “All bets will be off, the room will be up for grabs and the sky will be the limit when this crosses the auction block!”

To put this condition rarity into perspective, the next finest PCGS graded example is “just” MS-65. When the now MS-68 coin was offered as part of Bowers and Merena’s April 1997 auction of the Louis E. Eliasberg collection, it was uncertified and assigned a grade of MS-66 in the catalog. At that time it sold for $462,000.

One could convincingly argue that the market for top rarities has increased substantially since 2009, and the catalog entry warned that the dollar “is likely to disappear from the marketplace and not return for a long period of time once its next steward adds his or her name to the pedigree chain of this well-known and highly desirable rarity.”

The dollar represented a top price, but its various auction appearances over the years also document the challenges in accurately photographing toned coins.

In looking at the coin as photographed in four separate auctions, the character of the surfaces change substantially in each photograph.

The variances serve as a reminder that photos are merely an approximation of a coin’s true appearance. Also, a fact of our hobby is that coins are often photographed in slabs and these slabs can acquire scratches that, when photographed, can misrepresent the quality of the coin.

Since its 2009 offering, the 1889-CC dollar’s slab has acquired a few scratches, and for that reason the current images depict scratches on the holder that are not on the coin itself. That did not seem to matter much to bidders! ¦