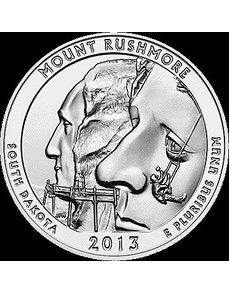 The 10 a.m. Mountain Time ceremony for the 20th coin in the America the Beautiful Quarters Program is two days after its release into general circulation.

Following the ceremony, First Interstate Bank in Custer will be in charge of the coin exchange, where cash can be exchanged for $10 face rolls of the 2013-D quarter dollars struck at the Denver Mint.

Menna’s design was inspired by photos of men adding the final details to Thomas Jefferson’s face. The depiction offers a unique and educational perspective on how Mount Rushmore was created and sculptured, according to Mint officials.

Sales by the United States Mint of bags and rolls of the Philadelphia Mint, Denver Mint and San Francisco Mint in several options will begin in November. The Mint’s product schedule does not feature specific release dates at this time.

Also scheduled to go on sale at some time in November are the silver 5-ounce bullion and collector versions of the coin, and a three-coin set of the coins.

The coin is already in multiple annual Mint products, in Proof and Uncirculated versions.

The coin options can be ordered through the U.S. Mint via its website at www.usmint.gov or by telephone to the order line at 800-872-6468.